Bram Stoker was born in Dublin, and a fully-fledged festival now celebrates the author.

Highlights of this year’s Bram Stoker Festival  include Dracula’s Fire Garden in Dublin Castle (where a young Stoker worked in the civil service). Blazing bushes and spooks brought to life by Spraoí are promised. There’ll also be a Bram Jam for musical kids at The Ark in Temple Bar, an exhibition on Dracula (the novel) at the Little Museum of Dublin, and ‘Vamportraits’ taken by a professional photographer could see your likeness projected onto the walls of Meeting House Square…

Bram Stoker was born at 15 Marino Crescent in 1847, to Abraham Stoker and Charlotte Mathilda Blake Thornely. He was the third of seven children, and spent the first seven years of his life in bed due to a mystery sickness (“the leisure of long illness gave opportunity for many thoughts which were fruitful… in later years,” he would write).

Clontarf is also home to a seafront Bram Stoker Hotel and the Stoker Dracula Museum, a quirky enterprise run by a local historian to the building’s rear. “Stoker is Clontarf’s sleeping giant,” says Denis McIntyre, who intersperses his artefacts and early editions with regular AV shows. 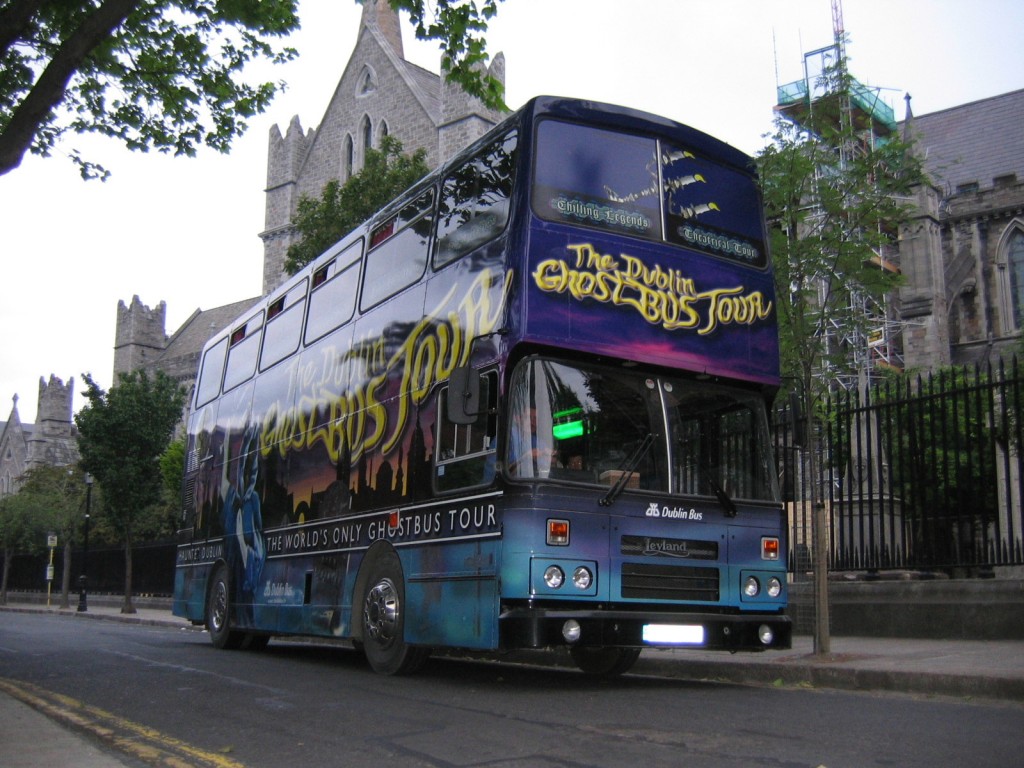 What could trump a tour of Dublin’s most haunted nooks and crannies? A tour on board the macabre mobile theatre that is Dublin’s Ghostbus, that’s what.

Step into the curtained saloon upstairs (if you dare), and you’ll embark on a two-hour jaunt through a parallel universe of felons, fiends and phantoms, with actors spinning yarns along the way. Stops include St. Kevin’s graveyard, the candlelit crypt of Christchurch Cathedral, and naturally, several sites associated with Dracula’s creator.

The Ghostbus passes Trinity College, where Stoker studied, the house where he lived at 30 Kildare Street, and the Shelbourne Hotel, where he met Henry Irving, the man who invited him to manage the Lyceum Theatre in London, where he went on to pen ‘Dracula’.

Bram Stoker was a regular visitor to Archbishop Marsh’s famous library (a record of books checked out by the author on July 13th, 1866, includes works by Spencer and Dryden).

In truth, however, even if Stoker had never darkened its door Marsh’s Library would on any ghost hunter’s itinerary. It’s not only home to the death mask of Jonathan Swift, but the ghost of Archbishop Marsh himself, condemned to search his bookshelves in perpetuity… 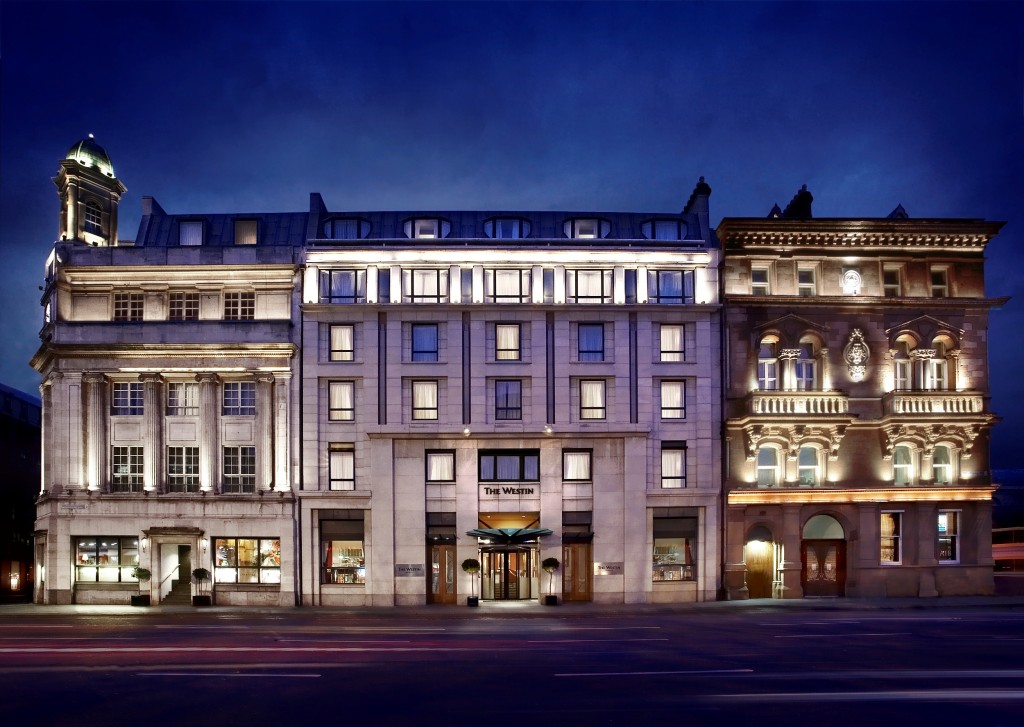 Dracula doesn’t have any dealings (that we know of) with the Westin, but that hasn’t stopped the five-star hotel unveiling a room named after his creator.

Guests needn’t get carried away with visions of coffin-shaped cribs and cobwebs on the walls, however – the room is one of nine refurbished suites named after Irish authors, though it is kitted out with copies of Dracula and lesser-known Stoker tomes like The Lair of the White Worm and The Lost Journal. The Westin currently has writers’ rooms from €246 per night.

Trinity was Bram Stoker’s alma mater, and by all accounts, he sunk his teeth into college life every bit as wholeheartedly as Dracula did his victims’ veins.

During his time at Trinity (1864-1870), Stoker served as Auditor of the Historical Society and President of the Philosophical Society – at one point proposing fellow writer, Oscar Wilde, for membership. He was also heavily involved in sport at the university.

Visitors can enter Trinity’s campus freely, and of their own will, though you may be spooked by the €9 fee to visit the Old Library and Book of Kells. The creepiness quotient rises by night, when clip-clopping footsteps echo over the college cobblestones.

Both of Bram Stoker’s brothers trained at Dublin’s Royal College of Physicians, the oldest surviving medical institution in the country. Its Kildare Street building was refurbished in 2005, and tours are available by appointment with the Heritage Centre.

Ghost tours stop outside No.6 Kildare Street, according to Dan O’Donoghue of Dublin Ghostbus, because it was here that Dr. Samuel Clossey is alleged to have dissected cadavers supplied by grave-robbers. Today, he says, the doctor’s spirit still wanders the corridors…

However, a College archivist told me: “I’m sorry to say the ghost story is not true.”

“There certainly was a tradition of doctors digging up graves… but this ended with the Anatomy Act in the 1830s, and the RCPI building wasn’t built until the 1860s. Samuel Clossey died in 1786, so it seems unlikely that he would choose to haunt a building that wasn’t built for another 80 years.”

Could Dracula have had a stake in Ballybough?

Bram Stoker grew up nearby in Clontarf and Artane, and fans say he’s likely to have visited a former cemetery in the area known for its “suicide plot”. In this unconsecrated patch, robbers and highwaymen were interred along with those who had died by suicide, and wooden stakes are said to have been driven through their hearts, to prevent their spirits from wandering.

Readers don’t have to look far to find a similar device in ‘Dracula’ and other vampire lore, though you’ll have more trouble finding the cemetery. It has long since disappeared.

Details: The 51A and 123 buses stop at Clonliffe Road.

The haunting bronze figures depicted in Rowan Gillespie’s ‘Famine’ are as close as contemporary Dublin gets to the walking dead (or un-dead). The staggering, emaciated figures commemorate a tragedy Stoker would have been deeply aware of – having himself been born in Black ’47.

Something else Stoker may have drawn on were Ireland’s 19th century cholera outbreaks. His mother told her young boy stories of  “the walking dead” and victims buried alive, along with old Irish legends of wandering spectres possessed of ‘bad blood’ or ‘droch fhola’.

Hints of ‘Dracula’, anyone?

Ok, so Greystones is a full 52 minutes (by southbound Dart) from Dublin. Dracula thought nothing of making journeys, however, so why should we?

“The nets as they rise from the water are starred with phosphorescent lights,” Stoker wrote on a visit to the seaside resort in August 1871. “As the ends of the net come nearer and the lead line comes up upon the beach, the fishes are seen struggling in the net and show their white bellies.”

Stoker’s ‘Lost Journal’, covering 1871-81, was recently published together with annotations by Prof. Elizabeth Miller and the author’s great grandnephew, Dacre Stoker (Robson Press). By all accounts, Stoker’s handwriting was as shocking as his blood-quaffing count.

The above passage is “a first attempt by Bram at writing descriptive prose in a sea-side town called Greystones,” Dacre Stoker recently told The Irish Independent.

“We didn’t realise that he went there quite frequently and we could surmise that it was just to get away from the hustle and bustle of the city, for fresh air.”