Chances are you’ll have heard of Cleaver East. The Temple Bar venture is barely open two months, yet already it has torn across the media like a tornado.

The most prominent coverage has not been about its food, alas (almost universally well-reviewed), but a flaming response by one of the restaurant’s head chefs, Oliver Dunne, to a review by well-known food critic Lucinda O’Sullivan.

There’s no need to rehash the saga here. Suffice to say that any potential diners Googling Cleaver East will find it hard to avoid the story of a spat culminating in Dunne Tweeting a violent image involving O’Sullivan’s severed head, and O’Sullivan reporting it to Gardaí… and almost a million Sunday Independent readers.

The PR fallout for Cleaver East remains to be seen. But for the moment, the net result is a restaurant that carries the whiff of infamy rather than fame, and an association with macho petulance rather than good food and service.

Which is a shame, because that food and service are good. And heartfelt.

Dunne and his partner chef, Rory Carville, have won Michelin Stars (Dunne with Bon Appetit in Malahide, and Carville at Lock’s). But it’s clear from the moment we enter that this is not a play for a mantelpiece gong. Cleaver East brings bright food, an imaginative concept, and a sassy reboot to the Clarence Hotel’s former Tearooms.

Staff wear black t-shirts emblazoned with slogans (‘Sorry I’m in a relationship with food’ or ‘If the food tastes bad your (sic) eating it wrong’). An island bar anchors an elegant-yet-earthy space bristling with decorative cleavers, subway tiles, funky tunes and a clever lowering of the tall ceiling using suspended timber beams.

Service staff are smart, friendly and know when to stand and chat (guests have ranged from Bono to Gay Byrne, I learn) and when to bring queries to the kitchen. The hostess, in particular, offers a textbook demonstration of how to welcome guests, treat them to personal recommendations, and make an unusual concept feel like fun.

Unusual, how? Well, Cleaver East offers 17 or so dishes served in tasting portions and delivered to the table as they are ready. Three or four options are advised per person, raising obvious comparisons with tapas – although the plates and portion sizes are slightly bigger, and the prices substantially higher. 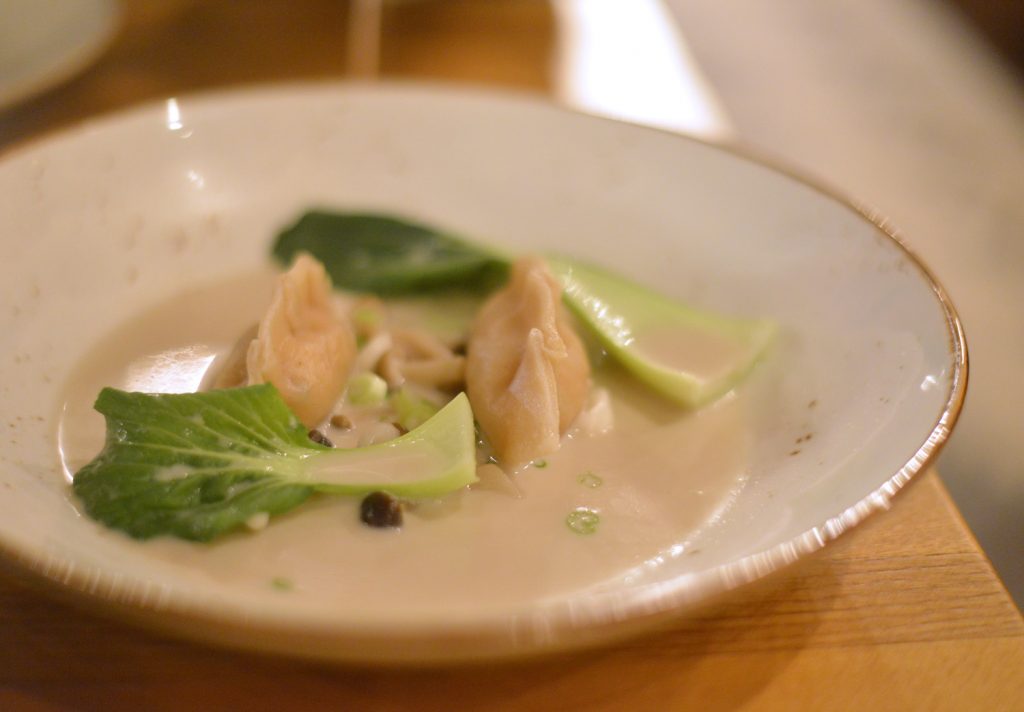 Despite the butch swagger, the food brings a surprising lightness-of-touch. A soft-poached duck egg (€8) contrasts a lovely, velvety yolk with bright green slivers of asparagus and a soft, nutty ricotta mousse. Lobster dumplings (€10, above) are edible islands in a tangy lemongrass broth spotted with fizzy oriental mushrooms pickled in lemon, star anise and white wine vinegar. Both are bright and confident dishes.

Of the meat courses, lamb breast served with rosemary aioli (€9, below) is tender of taste and texture, with a sinful sliver of fat sitting beneath its crispy skin. A playful take on beef curry (€13) brings a sensitive, if slightly dry, bump of meat dusted with spices and orbited by tempting treatments of pickled vegetables. 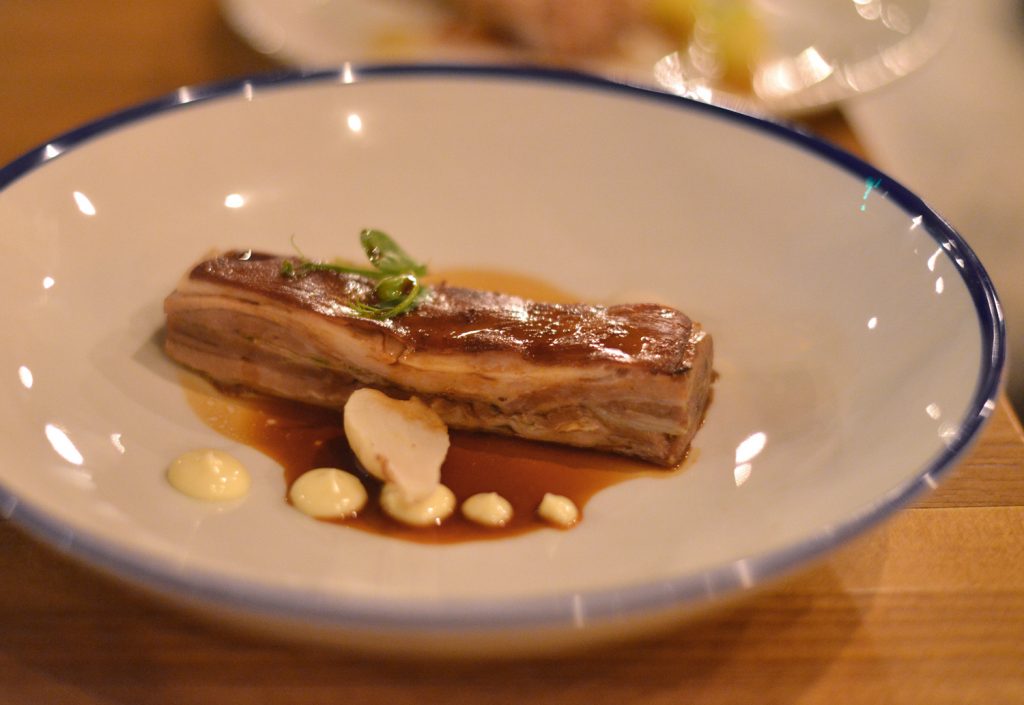 Our only quibble is with a barbequed cut of pork belly (€9) that doesn’t bring the bang of other dishes (although the crackling is light as popcorn). The monkfish (€14, below) is beautifully presented with sweet piquillo pepper sauce and Iberico crumbs, if slightly overwhelmed by a bed of black lentils that aren’t flagged on the menu. 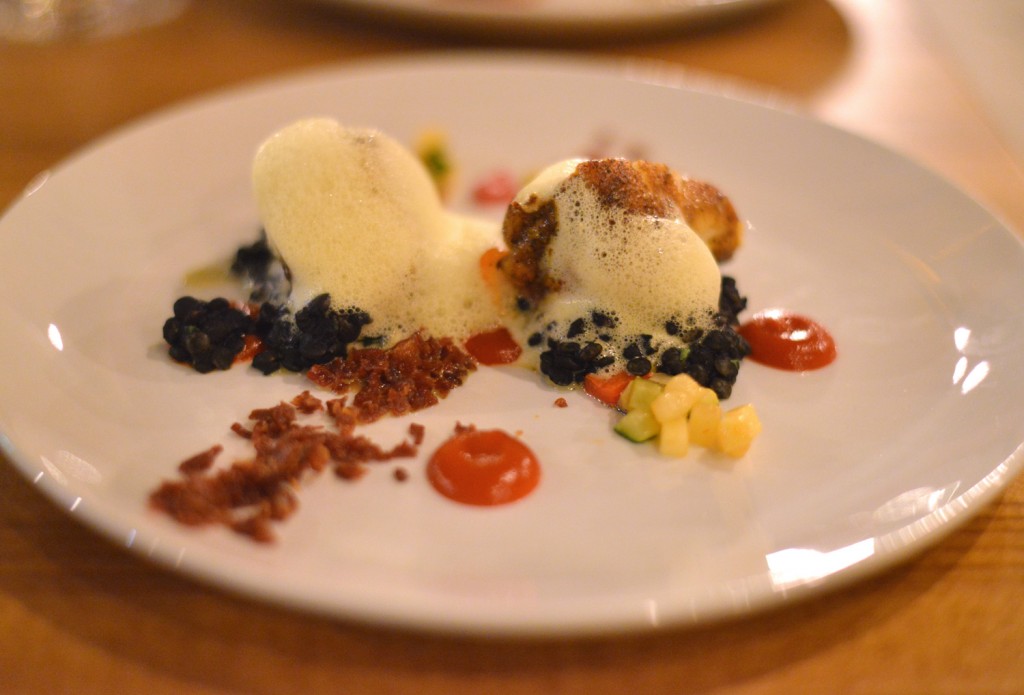 I love bold, new approaches to food. Starters, mains and desserts are the norm, but why should they be? Cleaver East’s tasting concept has its flaws (the table gets cluttered, dishes tend to cool off before we reach them, and random delivery makes wine pairings difficult), but it’s a hugely social way to eat. Sharing suits Irish diners.

The drinks list ticks its boxes effortlessly, too. You’ll find bubbles, craft beers, cocktails starting at €8.50 and some smashing wines by the glass – including an ace house white (Marques de Tezona 2011; €6) and an indulgent Rioja (Hacienda Lopes de Haro, 2006; €9.50) that manages to be bright, dark, fruity and seductive in one slosh.

We finished with a light lemon cannelloni and raspberry sorbet, a pair of get-your-act-together Americanos, and the idea to return of a Friday night.

Rest assured, Dunne is a far better chef than communicator.