Simplicity is the ultimate sophistication, Leonardo da Vinci said. And for all the advances in culinary technology since, his simple insight remains as sophisticated as ever.

The more I eat out, the more I curse over-elaboration. The more ‘serious’ restaurants I visit, the more I wonder why so many seem gung-ho on showcasing the technical difficulty of dishes, or the dazzling range of a chef’s abilities, rather than the simple smile on a customer’s face.

I’m not romanticising casual dining here. Far from it – we all know how easy it is to eat badly in a cheery cafe or bistro. What I am romanticising are restaurants that take their food up a level not by pushing it over the top, but by trusting in the simple things – great ingredients, flavourful combinations, a chef with both imagination and restraint, and the sparkle of a beautifully presented dish.

The Pig’s Ear does these basics breathlessly well. “This is comfort food at its best,” Georgina Campbell commented when announcing Stephen McAllister as her Irish Chef of the Year 2014. “It is great to find that a chef of this calibre values simplicity as much as creativity.”

He also values value. I visited with Emily Westbrooks, a Maine native who has made her home in Dublin and blogs about the city at FromChinaVillage.com, and we were both pleasantly surprised at the quality on offer on a three-course lunch menu priced at €21.95.

The starters were the first breath of fresh air. A hen’s egg – poached and fried – arrived in a small black skillet on a wooden board, with a teaspoon balanced on the side (pictured, top). Around it was a scattering of crumbly Clonakilty black pudding, adding a dark and textured juiciness to its milky white and moreish yolk. It was served with cep butter and a seared scallion twisted on top.

A dillisk-cured salmon (above) could have come from the kitchen at Noma. A black ceramic bowl curved around a velvety sliver of fish, its raspberry pinkness complemented by the greens of sliced apple, pickled cucumber and dill oil. The flavours weren’t quite up to the presentation, however – both the salmon and the cod brandade lacked the fresh bang we were anticipating.

Of our main courses, a pan-fried hake served with Mourne’s smoked haddock, toasted seeds and buttery carrots (below) again showcased McAllister’s flair for composition. The whiteness of the fish played off the autumn-crispy colours of its skin; the electric colour of the carrots and an orange-infused puree (at first, I thought it was pumpkin) made me sit back and go, whoah. 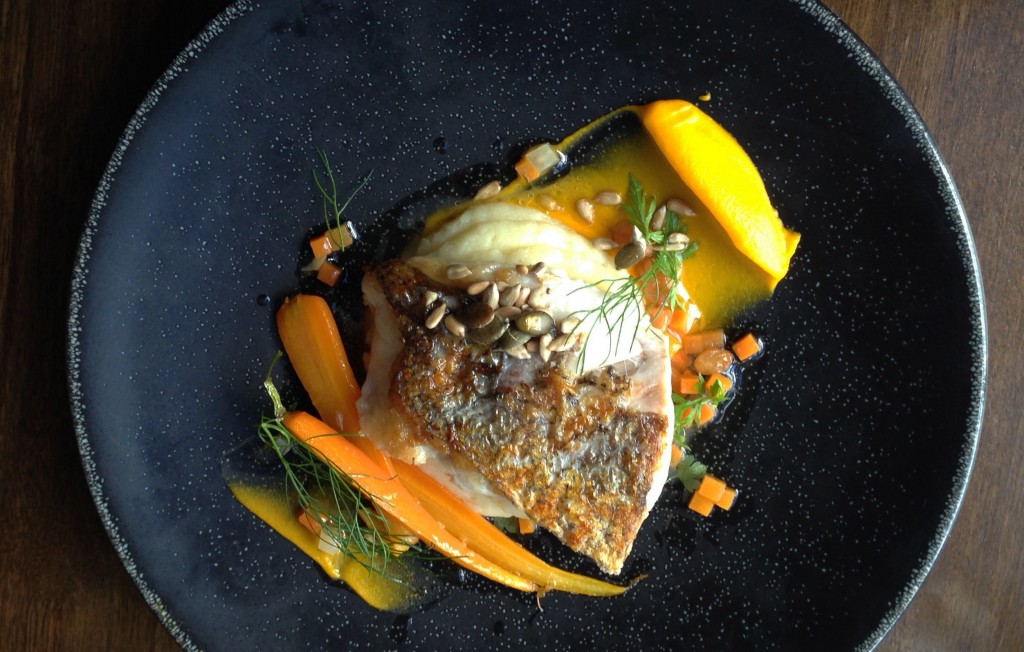 Emily’s favourite dish was a slow-cooked leg of duck. It sat atop of a bed of toasted oats, sweetcorn and barley, and was topped with a heavy dusting of truffle and hazelnuts. The crunch of the nuts, the bite to the corn and the decadent softness of the duck chimed nicely.

We finished with vanilla cheesecake served with berry jam and crumbled Hob Nob biscuits (the quirky mix was fluffy on the tongue, heavy on the tummy) and two scoops of brown bread ice-cream served with candied pecan nuts and crumbled Guinness cake.

As you’d expect, homage is paid to the finest of Irish producers – there’s a shepherd’s pie made with Lough Erne milk-fed lamb here, crab with Goatsbridge trout caviar there. And though the approach is earthy and modest (it dubs itself a “no-frills” restaurant), McAllister’s culinary chops, the beautiful tableware and a gift for presentation offer a dining experience that is anything but. 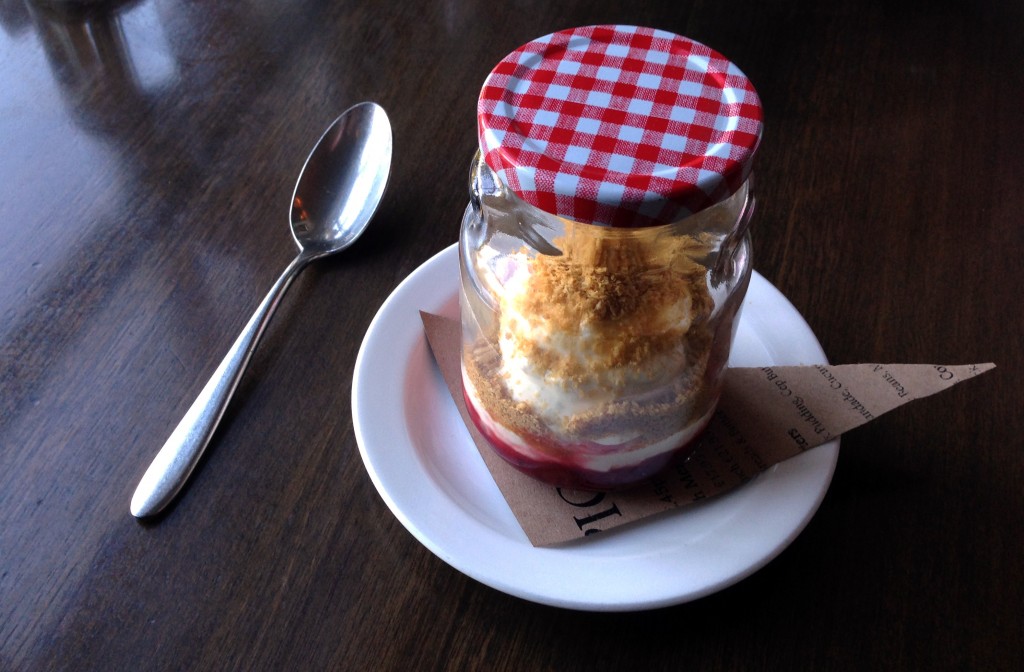 The Pig’s Ear is a masterful exercise in understatement. Don’t be fooled by homely touches like sugar served in the bag and cheesecake in a jar, or the sparsely furnished rooms, with their dozen or so bistro-style tables, large mirrors and sash windows framing views of Trinity College. It’s a modest setting – even an unremarkable one – but it works brilliantly as a background for McAllister’s creations.

A pig’s ear it ain’t, in other words – and deservedly, it boasts one of only four Michelin Bib Gourmands in Dublin (awarded for “good cuisine at a reasonable price”). Get in quick, though – its star is rising, and the special lunch menu will not be available through the busy month of December.

Review: The Pig’s Ear originally ran in The Irish Examiner.