Longford is the black hole of Irish tourism.

Despite its rolling farmland and riches like Lough Ree and the Royal Canal, it merits just three of 700+ pages in John & Sally McKennas’ Irish Food Guide. In my Lonely Planet, it’s even worse: the entire county gets just half a page.

Why is this? Perhaps Fáilte Ireland has invested elsewhere at its expense. Perhaps Longford town just doesn’t cut it as a hub. But there is one shining light. There is one venue consistently recommended as a reason to visit: Viewmount House.

Set on four secluded acres just outside the county town, Beryl and James Kearney’s Georgian country house (pictured above) was once owned by Lord Longford, and today cossets away a dozen or so rooms and a highly-regarded restaurant: ‘VM’ at Viewmount House.

Since this review was posted, ‘VM’ won Irish Restaurant of the Year at the Georgina Campbell Awards 2014.

‘VM’ occupies the old stables in an atmospheric sprawl of outbuildings, and there’s a church-like feel to the dining room: candles flicker on windowsills, beams criss-cross in the vaulted space overhead, oily-black columns rise up from wooden floors, and svelte brown leather chairs are bisected with curvaceous lines of coffee-cream.

It’s a white-linen, special occasion kind of place (on our visit, the set menu costs €53.50pp; the early bird €35). And by all accounts, it does a roaring trade for Sunday lunch.

If Longford sometimes seems disconnected, VM’s chef is anything but. Gary O’Hanlon is prolific  on Twitter (@gazzachef), has appeared on MasterChef, The Restaurant and Four Live, and is passionate and plugged-in – as his long list of local suppliers attests. You could fill an extra guidebook page right there.

His menus, however, could be easier to engage with. Densely laid out in fusty fonts, they’re crammed with detail that occasionally goes overboard. For example: “Herterich of Longford Ham Hock, Friendly Farmer Chicken, Carrot, Kale & Mushroom Terrine with Celeriac & walnut remoulade, Tarragon Aioli and Cornichons.”

This isn’t to knock the sophistication of the food, I should clarify. And it’s exciting to see Middle Eastern and North African influences in an Irish country house menu. Dates, figs, nuts and exotic spice mixes are peppered throughout, and together with O’Hanlon’s seasonal twists (even the crème-brûlée contains spiced pumpkin), the result is some delicious and unusual fare. 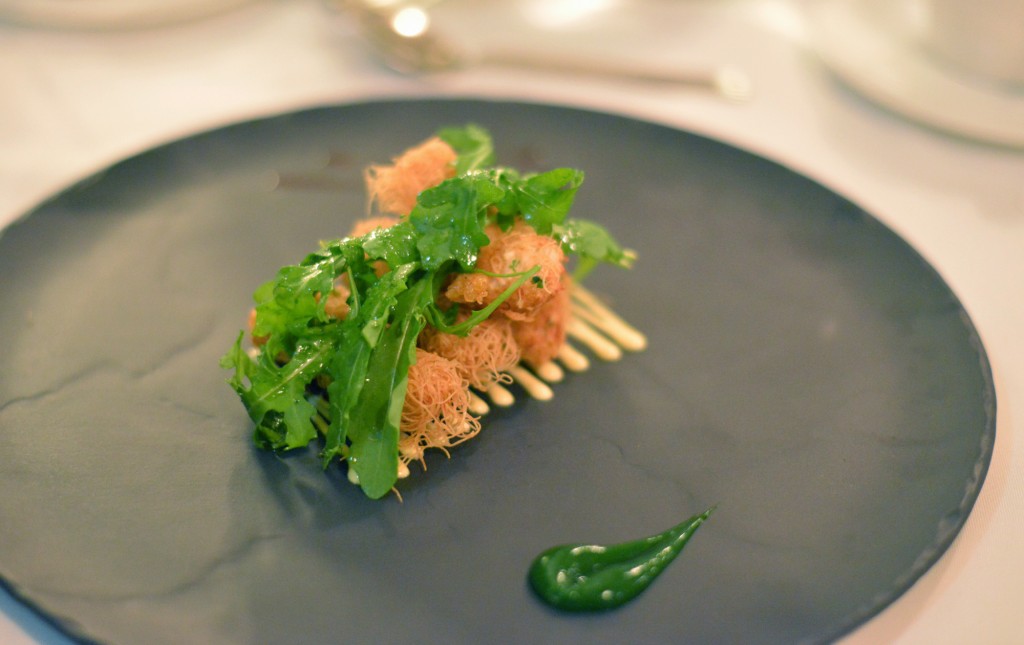 Clogherhead prawns come in birds’ nests of Kataifi pastry, for instance (pictured above) – in a starter showcasing VM’s polished balancing of complex flavours, textures and presentations. Sparky rocket and sweet lines of mango mayonnaise are the yin to the dry, wiry pastry’s yang.

A tasting plate of Irish pudding and rare-breed pork is another hit, and a Mulroy Bay scallop, served in prawn bisque with saffron and pearl onion, is a spot-on combination of seared (and thinly sliced) scallop, soupy comfort, and simple-but-effective presentation. 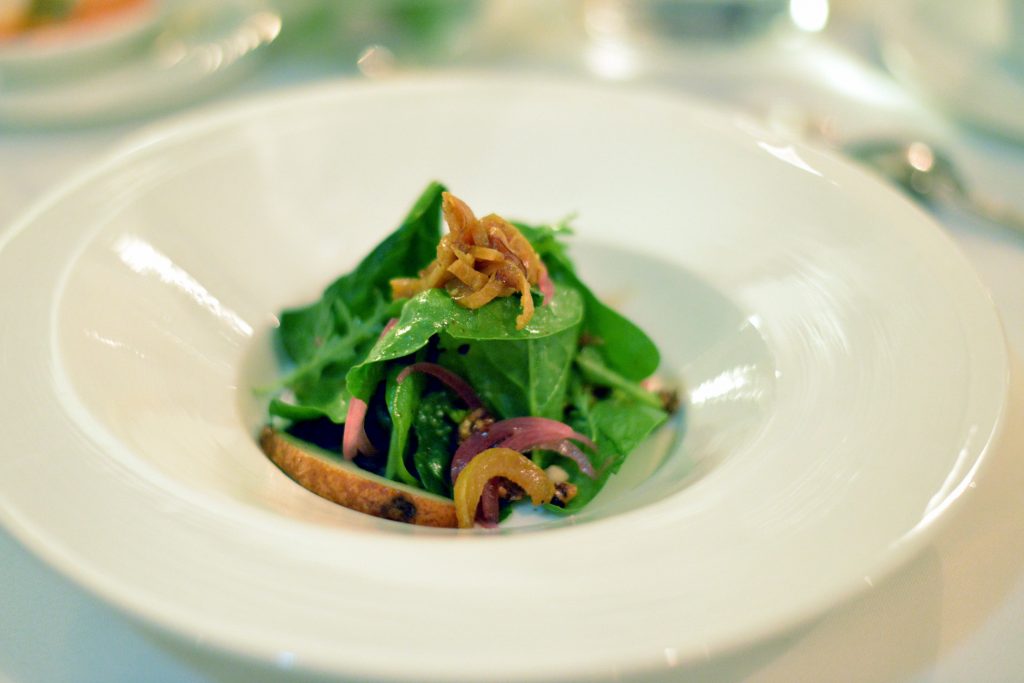 It’s lavish food, and bean-counters should note that the €53.50 menu includes a pre-starter (a duck confit spring roll), breads with freshness and attitude (one is shot through with piquillo pepper), a ‘Middles’ course (from which we enjoy a ‘taste of the season’ salad – pictured above – and a pot of cranberry jelly), and a playful mix of petit fours.

It’s value for money, in other words.

Of our main courses, a fillet of salmon cooked sous-vide (i.e. in a sealed bag) at 58-degrees and served with pepper risotto and avocado puree, is exquisitely moist and flavoursome. Milk-fed veal is textbook tender, with chicken wing jus and smoked potato and garlic puree amongst the accompaniments.

The Donegal monkfish (pictured below) doesn’t quite chime, however. It’s coated in a dry and dominating ‘Raz el hanout’ spice rub, with crispy pancetta sails playing off precise slices of fish. A butternut squash bisque is sweet and wintry, but padding it with pumpkin seeds and semolina, for me, tips the dish too far over the top. 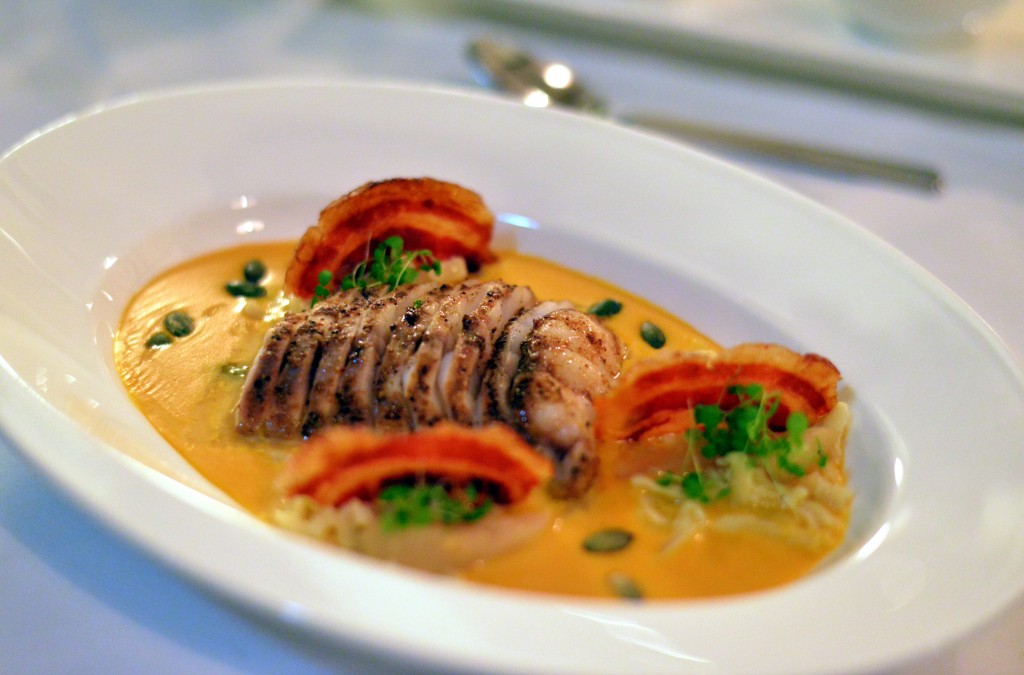 There’s a similar sense with one of the desserts, a ‘PBJ’ featuring peanut butter parfait, apple jelly, apple meringue, bee pollen, raspberry gel and coconut paste. It’s impressively plated, but the parts are more than the whole. It’s a dish more discussed than devoured.

Of course, restaurant reviews are simply a snapshot, one set of opinions. If VM over-reaches occasionally, that’s as a result of creative ambition. And when everything clicks, it really does click – we sigh with delight.

This is a bright light in a black spot, and Beryl Kearney makes a fine hostess, gliding between tables and inquiring after each dish with genuine interest.

With B&B from €55pp, it’s worth travelling for.