They broke the mould when they made Belleek Castle.

Set in a 1,000-acre wooded estate outside Ballina, guests arrive into a baronial-style hall bedecked with dark oils and daffodils. Carry on, and you’ll find four-poster bedrooms, a bar that recreates the Captain’s Ward Room in a Spanish Armada galleon, and a basement museum crammed with curios ranging from Grace O’Malley’s bed to the last wolf shot in Connaught.

The best exhibits of all, however, are on the plate.

I drove a stretch of the Wild Atlantic Way recently, and spent a night in this unusual 19th century castle. I hadn’t heard of its chef, Stephen Lenahan (pictured above), and had no idea what to expect of its five-course midweek market menu (€49.50).

When a deft arrangement of Achill lobster, citrus-cured gravlax, peas, samphire and saffron gel emerged from the kitchen (below), however, it was clear something serious was going on. The lobster was firm yet fluffy. The pretty composition had just the right scattering of foams and gels. The soft textures of seafood played brilliantly off the fresh crunch of peas and samphire. It took me completely by surprise.

Lenahan, it turns out, is a bit of a mould-breaker himself.

Hailing from Ballina, he has worked under the radar at Belleek for 14 years. He is not a celeb. You won’t catch him on TV or the festival circuit. And yet, he cooks with a freedom, confidence and delicacy worthy of Ireland’s top chefs.

A forest and hedgerow soup, for example, sees a wonderfully earthy mix of rough-blended morel mushrooms topped with broken walnuts and a dash of wild garlic and nettle pesto. ‘Cashel Blue Caviar’ pairs pearls of tapioca with pungent, creamy cheese (below) – a combination I last saw on a menu at Chapter One. Its accompanying garden leaves, grown in a polytunnel outside, are delicious.

In fact, Lenahan is offering some of the purest renditions of place on a plate that I’ve come across in recent years. Pretty much everything he serves is seasonal, trawled from a small catchment area around the castle – be it butter flavoured with garden herbs, wood sorrel from the forest, vegetables from Enniscoe House or meats from Mayo butchers (he does the dry-aging in-house). 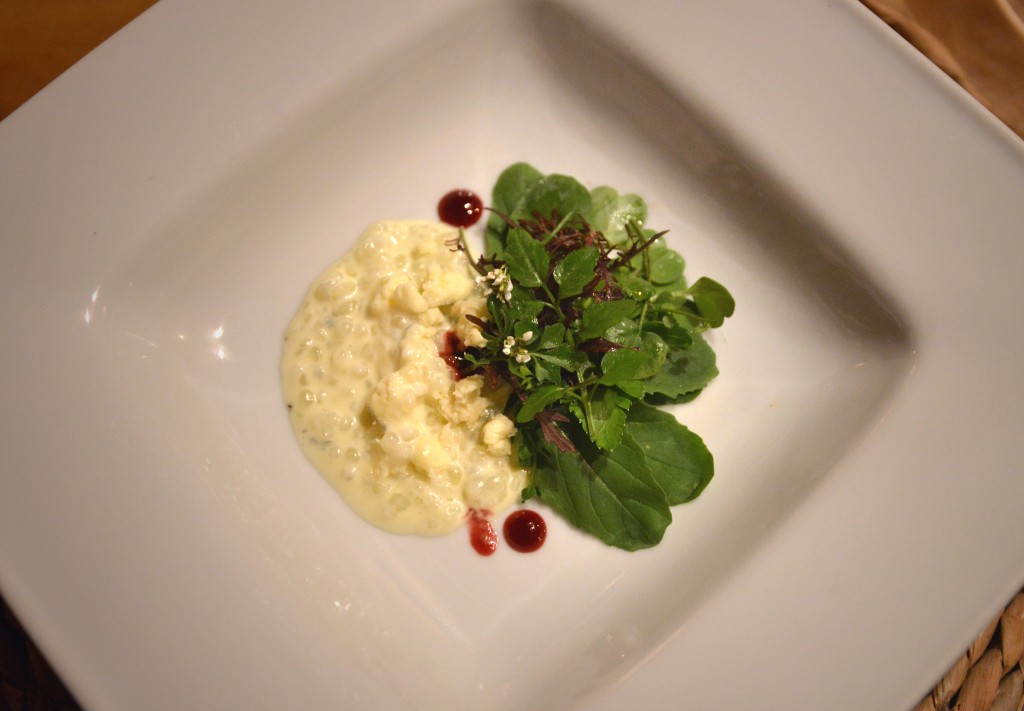 A light suet pastry tart (below) is filled with castle chutney and topped with rare-breed pork and a strip of air-dried ham. Again, the elements are well-balanced, the portion size perfect, and the composition pleasing – as is the case with another flavourful dish, the turf-smoked Mayo lamb with sweet carrots and braised-shank pudding. It comes with a little molecular flourish in the shape of several mint ‘pearls’ on top. 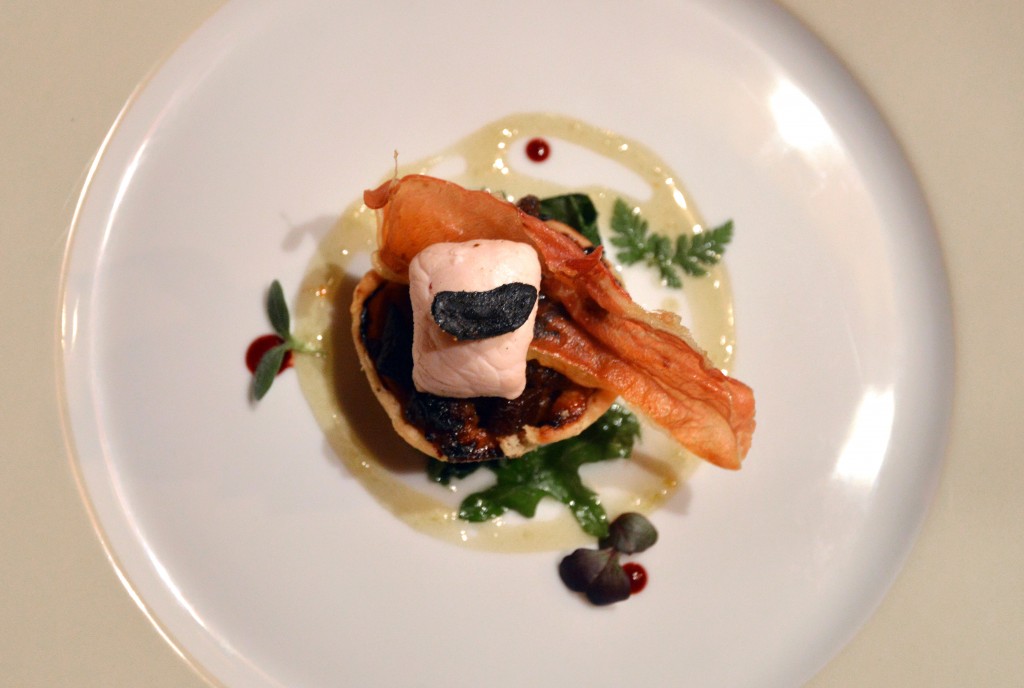 Somewhat surreally, this excellent food is served in a series of rooms that could equally serve as a theatre set or living history experience.

One is decorated with a stag’s head, crushed-velvet seat covers and a curving oak staircase straight out of a fairy-tale forest. Another feels like a classic Victorian drawing room. Wacky ‘Tween Decks’ are styled to look like the upper and lower decks of a 17th century galleon, complete with salvaged baulks.

Then there is ‘The Drunken Bullock’ (above, top), a signature dish that sees Lenahan flambé a steak at the table on an antique Spanish sword. His aim, he says, is to combine classic and imaginative cooking with the drama of the castle setting.

Worldly foodies may wonder what to make of it all. Themed dining is nothing new, of course, but I’ve never encountered such fresh – and occasionally exquisite – flavours in such an eccentric setting. Lenahan’s restaurant has two AA Rosettes.

My own take is that Belleek Castle is simply uncategorisable – sometimes gorgeous, sometimes gauche. Its décor doesn’t click the way it might in a classically elegant, Blue Book bolthole. You’ll find strange mixes of furniture, with straw placemats and paper doilies under teacups, for example. Despite a genuine effort and good dish descriptions, the service is also rather less polished than the chef.

Belleek can be quirky, but there’s enough warmth, heart and history here to stop things spilling over into camp. With a chef like this at the helm, a national profile beckons… a Belleek Castle Cookbook might be a good start.