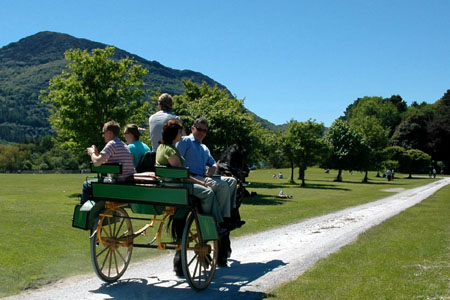 Since Queen Victoria visited 150 years ago, Killarney has built an international brand out of its package of sensational landscape and slick paddywhackery.

Awesome as McGillycuddy’s Reeks and the Lakes of Killarney may be, however, the diddley-aye music, fusty knitwear and hovering jarveys (picture courtesy of Jerry O’Grady / Killarney Tourism) aren’t everybody’s cup of tea.

“Its studied twee-ness is renowned,” as Lonely Planet’s Ireland guide puts it.

But that may all be set to change.

Killarney in 2011 feels less like a tacky tourist trap than a dynamic community reinventing itself in a recession, and one that – dare we say it – is looking decidedly hip in the process.

Now, it seems, a visit by the Duke and Duchess of Cambridge could even be on the cards.

Former mayor Donal Grady extended a formal invitation through the British embassy after chatting with Queen Elizabeth on her recent State visit. The monarch didn’t rule out a future trip to Killarney for herself or William and Kate, and a formal answer is expected this year.

If you’re wondering where this dogged optimism comes from, pay a visit. I spent three days in Killarney recently, and the first thing I noticed was the sheer volume of American accents.

But the energy wasn’t just coming from tourists.

Footballer and Fashionista Paul Galvin was playing hip-hop and grime on Radio Kerry. Design collective Project 51 was plotting a showcase in West End House (you can catch it on September 29th). ‘Pay As You Please’, a pop-up restaurant asking diners to “pay what you believe your experience is worth”, was starting to look like a permanent fixture.

Of course Killarney, which dates back 250 years as a tourist town, has a head start. Kerry’s stunning landscape and National Park are one of the main reasons a town of 14,000 souls can host several five-star hotels, the Irish Open, and festival acts like Pink and Simple Minds.

Similar-sized towns like Portlaoise or Letterkenny must be green with envy. But location will only get a town so far – Killarney has been astutely managed, too.

“They have it mastered at this stage,” says Brian Hurley, presenter of the Breakfast Show on Radio Kerry. “It’s so well-marketed. They’ve been through recessions before, they’re very cute and cunning people [and businesspeople]… everything they do, they seem to do right.”

A new generation of foodie-preneurs is also making waves. Take Sandra and Peter Dunlea, who have opened Miss Courtney’s Tearooms, the Smoke House, The Markets (a new food hall) and a new restaurant in West End House – all whilst the recession has been in full swing.

“A lot of that is to do with availability of space,” Peter says. “Most of the leases being handed out now are very straightforward, in the sense that if the business doesn’t work, you’re able to get out without being punished. You’re able to take a punt, in other words.”

There are signs of recovery elsewhere too.  Footfall at Muckross House – a barometer for tourism in Kerry – is up 20% this year, according to Pat Dawson of the National Parks & Wildlife Service.

“Hotels have seen the light,” he told me. “They’re pricing appropriately.”

“A lot of backpackers are putting Killarney on their hit-list as well,” adds Brian Hurley, highlighting live bands at the Grand Hotel as a counterpoint to Killarney’s cheesy cabarets.

The Tidy Towns win was a culmination of many years work, says Killarney’s mayor, Cllr Sean Counihan, who rejects any suggestion that his hometown is tacky or twee.

Killarney is “holding its own” in the recession, Counihan believes, due its marketing, its friendliness and its cosmopolitanism. “Where we live is no harm, either! The way the town is designed, it kind of blends into the national park itself… we’re conscious of where we live.”

On my visit, Killarney felt like a recession-free zone. Traffic crawled in off the Ring of Kerry, Murphy’s ice-cream was doing a roaring trade, and the Malton, formerly the Great Southern Hotel, had spent millions upgrading its public areas into a glossy, contemporary space.

But it’s not all sweetness and light. Killarney is still brimming with tacky souvenirs, restaurants can still be pricey, and its outlet mall is a soulless space. Killarney doesn’t have the class of nearby Kenmare, and it certainly lacks the coastal vim of Dingle, Westport or Kinsale.

Killarney House, where Queen Victoria spent a night on her visit 150 years ago, was sold to the State by its last owner, John McShain, on the assurance that it would be incorporated into Killarney National Park. Since McShain’s death in 1998, it has fallen into appalling ruin.

Yet even this eyesore is being reinvented, it turns out. A recently-announced €5.2 million grant is set to transform Killarney House into a new gateway for Killarney National Park by 2014.

It ain’t Soho. But Killarney is definitely sexing up.

This feature originally ran in The Irish Independent.