“I can do things,” says Barbara Hendricks.

She says it with an endearing honesty and straightforwardness. And she’s right.

Hendricks, runs El Chupadero – a beautiful little bodega between Yaiza and Teguise. She took over the old winery in the 1980s and, bit by bit, has turned it into one of the most atmospheric eateries on the Canary Islands. The old grape-press, where harvests from black volcanic soil would have been squished underfoot, is still in a room down the back.

It’s the kind of discovery seasoned travellers live for.

El Chupadero is named for a nearby mountain, and sits at the end of a short dirt road off the L30 in La Geria. When I arrived, an old man sat outside smoking a cigarette. He wore a fedora, but no socks. 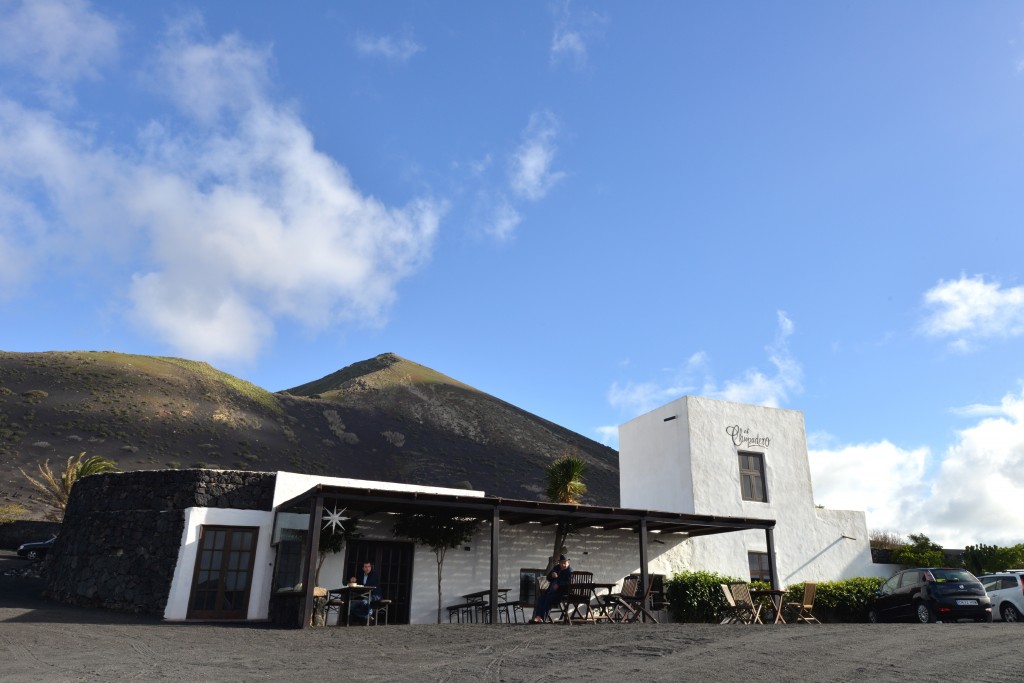 Step through the front door and – boom – the loving design details come thick and fast.

There are black and white photos of local artists, vibrant paintings of animals and food (check out the cat and red mullet behind the bar, below). Bougainvillea sprouts from a 5-litre olive oil can, and a glass vase on the bar counter. Ther are several hanging baskets. A log fire burns in a fireplace mounted between two white shelves, and if you look closely at the walls, you’ll see 311 hand-painted roses (they turn blue under UV light).

And naturally, this being Lanzarote, every wall and archway is toothpaste-white. 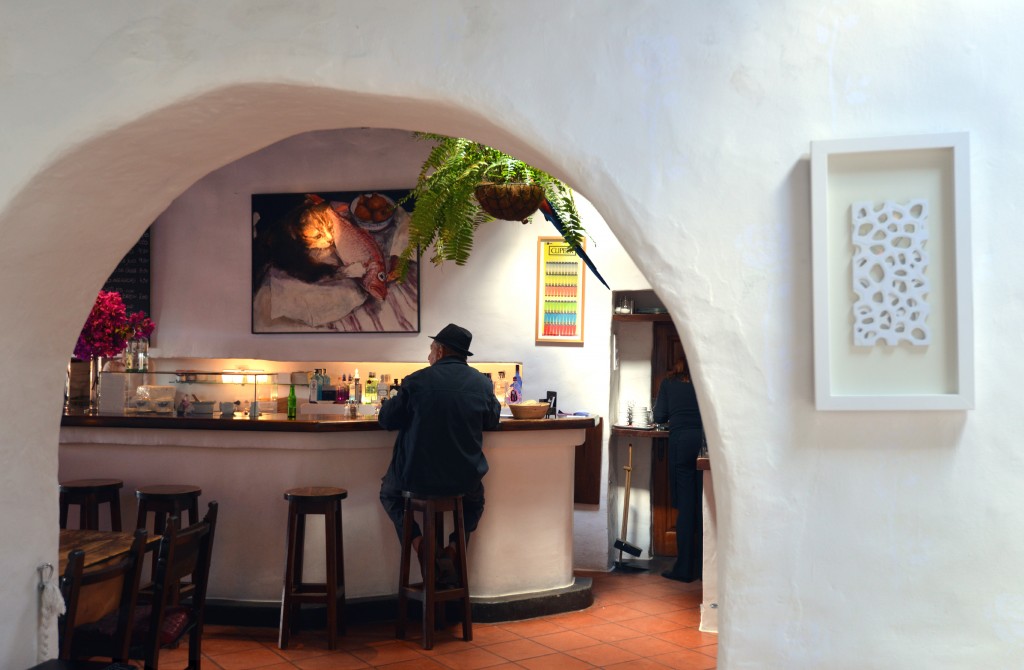 The menu is short and sweet, a careful mix of local ingredients and classic Spanish tapas.

Wild prawns are served sizzling in oil (below), with slivers of garlic at the bottom of the dish and a sprinkling of herbs on top. There are sweet dates wrapped in bacon, salty papas arrugadas, tomato soup using “only tomatoes,” as Hendricks puts it, and ruby-red shreds of Iberian ham. Most dishes come in well under €10. 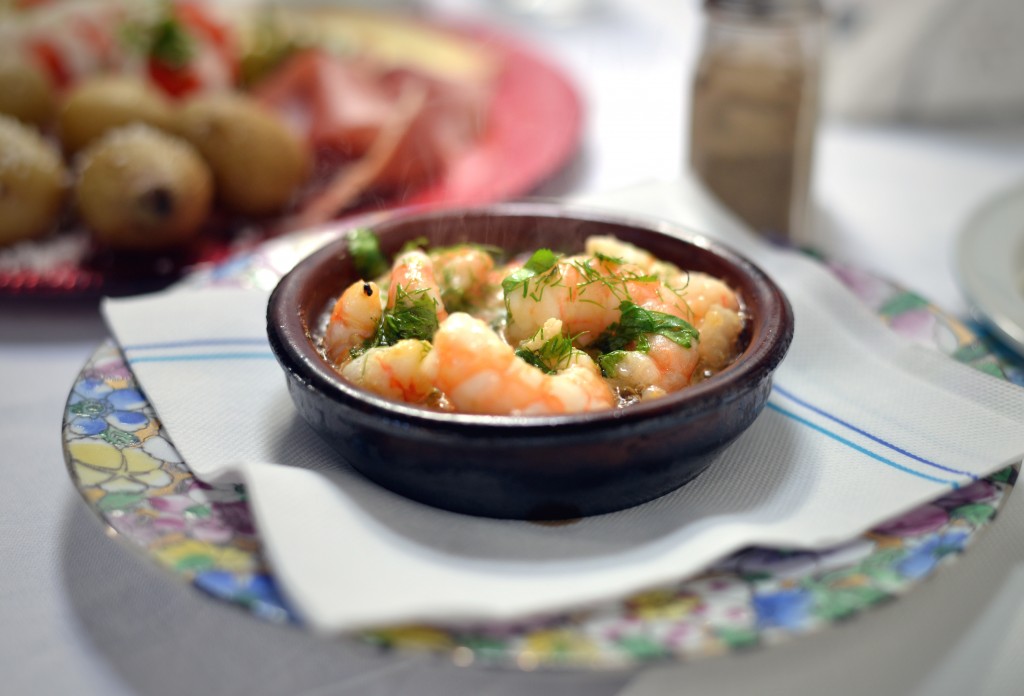 Can’t decide what to eat? The trick is to order a selection. Sweet, chewy meats. Milky mozzarella with sun-fresh tomatoes. Pickled anchovies with just the right mix of vinegar and slither, garnished with a crescent of lime and crunched garlic that doesn’t overwhelm. A basket of bread rolls on the side (below). 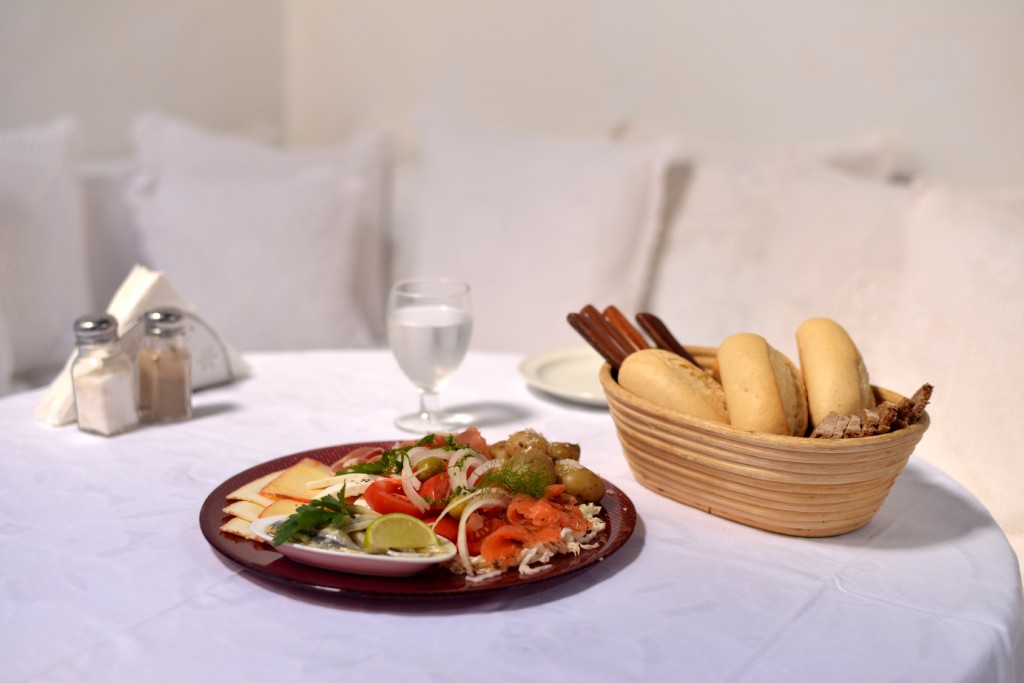 What ties it all together is the personality, and eye for detail, of its owner. At various points in our brief chat, Hendricks describes herself as  a builder, carpenter and designer. She hails from Germany originally, and dresses in black, with a patterned scarf picking up her blond hair. She gestures with big, practical hands.

Right now, she’s into her fourth decade running a restaurant that isn’t hooked up to Lanzarote’s water or electricity mains. 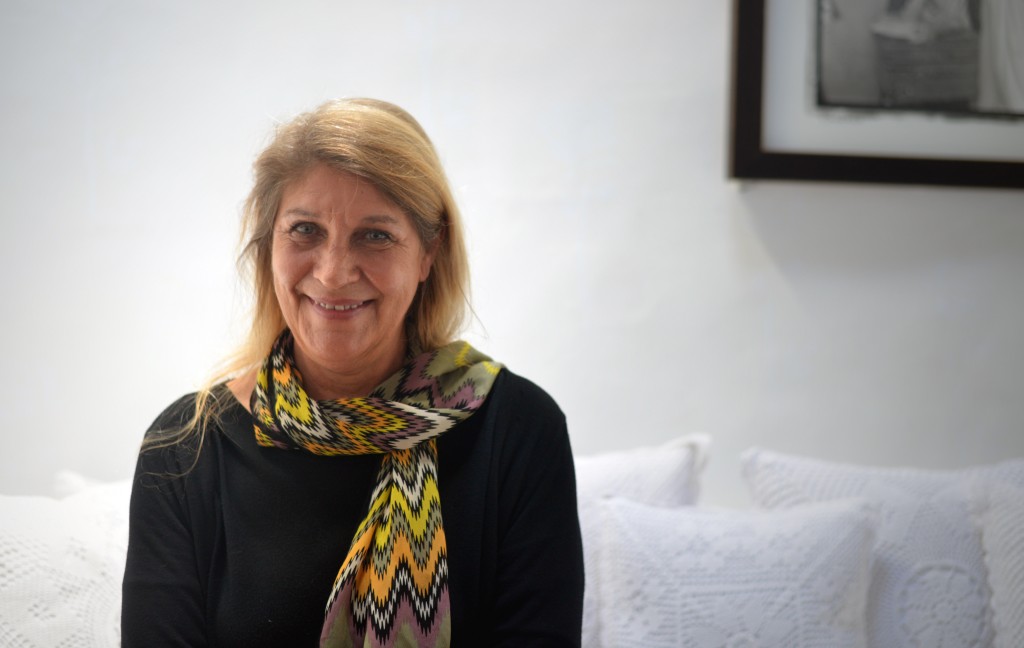 Years ago, El Chupadero was famous for its full moon parties (even César Manrique showed up). One of its paintings is of Frieda Kahlo, the Mexican painter famous for her self-portraits.

It’s a beautiful tonic to the generic seafood bars and thumping pubs of Puerto del Carmen and Playa Blanca. El Chupadero is not just worth a detour, but quite possibly a journey in itself.