Fashion often dictates where and how we travel, but it can be a reason for travel in and of itself too. Here’s a list of 10 places I’ve come up with where fashion is the heart and soul of the trip… from Versace’s former villa to Philip Starck’s Palazzina Grassi in Venice… and there’s a couple of Irish inclusions too.

At first it may seem morbid, booking a room in the mansion where Gianni Versace was shot. But you wouldn’t be the only Versace voyeur. 1116 Ocean Drive, where the designer lived at the time of his death in 1997, is apparently America’s second-most photographed house. Miami impresario Barton G. Weiss has restored the Italianate palazzo into a bling-tastic boutique hotel that will burn the eyes of anyone looking for understatement (try the $5,000-a-yard Versace curtains, for starters). Guests staying in the 10 suites are assigned British-trained butlers and can look forward to balcony views, cashmere throws and Kindle e-readers with complementary electronic newspaper delivery.

There’s no shortage of cutting-edge threads in London during fashion week, but you can see them year-round at this funky little collection in Bermondsey Village. Contemporary fashion, textiles and jewellery are the order of the day in a museum founded by British designer Zandra Rhodes, but it’s not just about celebrating the past. The FTM also runs creative courses for students, has a knockout café, and is running an exhibition of Sue Timney’s work until April 25th. Timney-Fowler products, famous for their black and white imagery, are for sale in a cool little shop too – alongside other treats from up-and-coming designers in the capital, including kitted scarves and eel-skin purses.

Lord knows, there’s no shortage of couture in Manhattan. Soho, Midtown, Fifth Avenue – all are basically catwalks in themselves, and home to some of the biggest brands and brashest boutiques known to mankind. Even by Big Apple standards, however, the stretch of West 14th Street between 9th and 10th Avenues stands out. Right on the edge of the Meatpacking District, the names on some of the vaulted warehouses here are to die for (Diane Von Furstenberg, Stella McCartney, Alexander McQueen), and New York’s green space du jour, the restored High Line Park, is at the end of the strip. Don’t be fooled by the neighbourhood-on-the-turn feel, mind. The prices are sky-high, though you can drown your sartorial sorrows with a cocktail in the Standard Hotel afterwards.

Details: nycgo.com. Hotels.com has rooms at the Standard from €264. 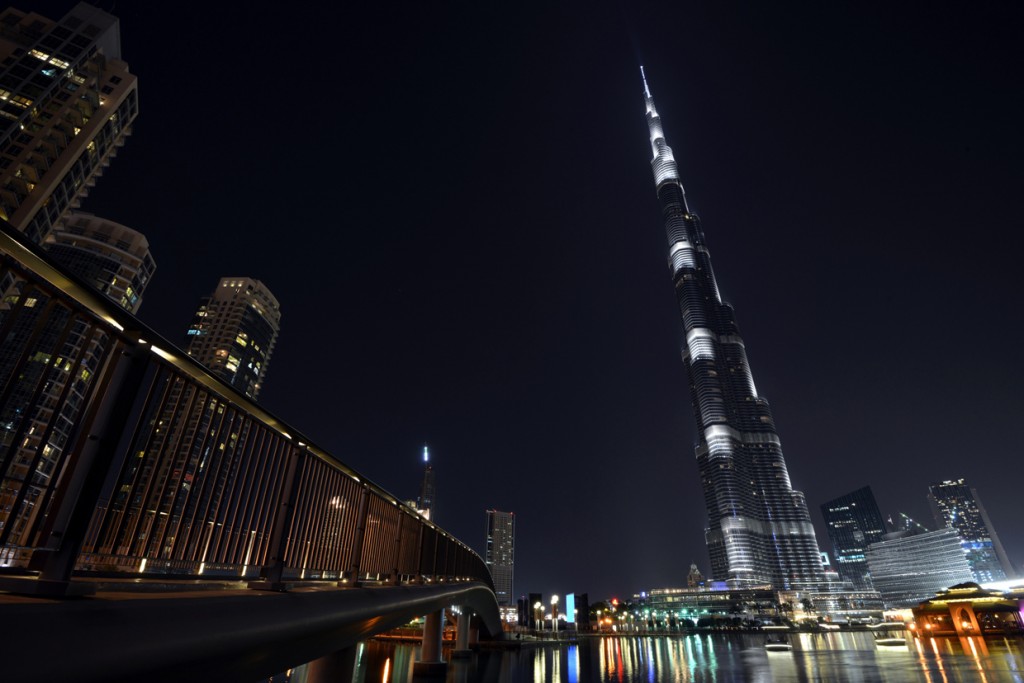 Giorgio Armani is another designer segueing into hospitality, having opened the first of his Armani hotels in Dubai last April. Stashed away inside the Burj Khalifa, the tallest building in the world (pictured above), the concept here is similar to Versace in Oz, in that it aims to evoke a lifestyle experience – banging the designer’s personal stamp onto everything from the Armani Spa to the fabrics and furnishings in the rooms and suites themselves. Florentine leather, Japanese Tatami floors and green bamboo marble from Brazil (take that, Donatella!) are all part of the playbook, and there’s more of the same in store for Georgio’s second Armani hotel, scheduled to open in mid-2011 Milan.

All kinds of fashion-branded hotels were being mooted before the global financial crisis, but this is the original and – and as Donatella Versace would say – the best. That’s because she’s a part-owner. Since it launched in 2000, the Gold Coast’s most famous hotel has attracted all sorts of celeb guests as a Versace lifestyle experience. 204 rooms, 72 condos, a sumptuous spa and lavish restaurants are all decked out with Versace furniture, linen and silverware and Italian marble. The Versace boutique is home to one of the biggest men’s tie collections on earth, too.

London isn’t the only fashion show in town, you know. Belfast celebrates its Fashion Week in March, with the Irish catwalk debut of Dannii Minogue’s Project D collection a recent big draw – alongside the latest outings from House of Fraser, Cruise, Reiss, Ted Baker and French Connection. The Northern Ireland Tourist Board had a special offer at the Europa Hotel (itself no stranger to celebrities, with past guests ranging from Bill Clinton to Atomic Kitten), with two nights’ B&B and one dinner starting from £115pp. The hotel is HQ for Fashion Week, and hosts a number of the nightly shows.

Is there anything Philippe Starck can’t design? Furniture, foodstuffs, clothes, luggage, motorbikes, cutlery… some years back, he even brought his signature flourish to the men’s room of the 28th floor bar at the Peninsula Hotel in Hong Kong (the urinals edge right up to floor-to-ceiling windows, making it feel as if you’re peeing on the skyline). One of Starck’s more recent projects is the Palazzina Grassi in Venice, a 16th century residence converted to a hotel off the Campo Santo Stefano. Exposed brickwork, lashings of mirrors and transparent glass wardrobes are all designed to make guests feel ‘temporarily Venetian’. At this price, they’d want to. 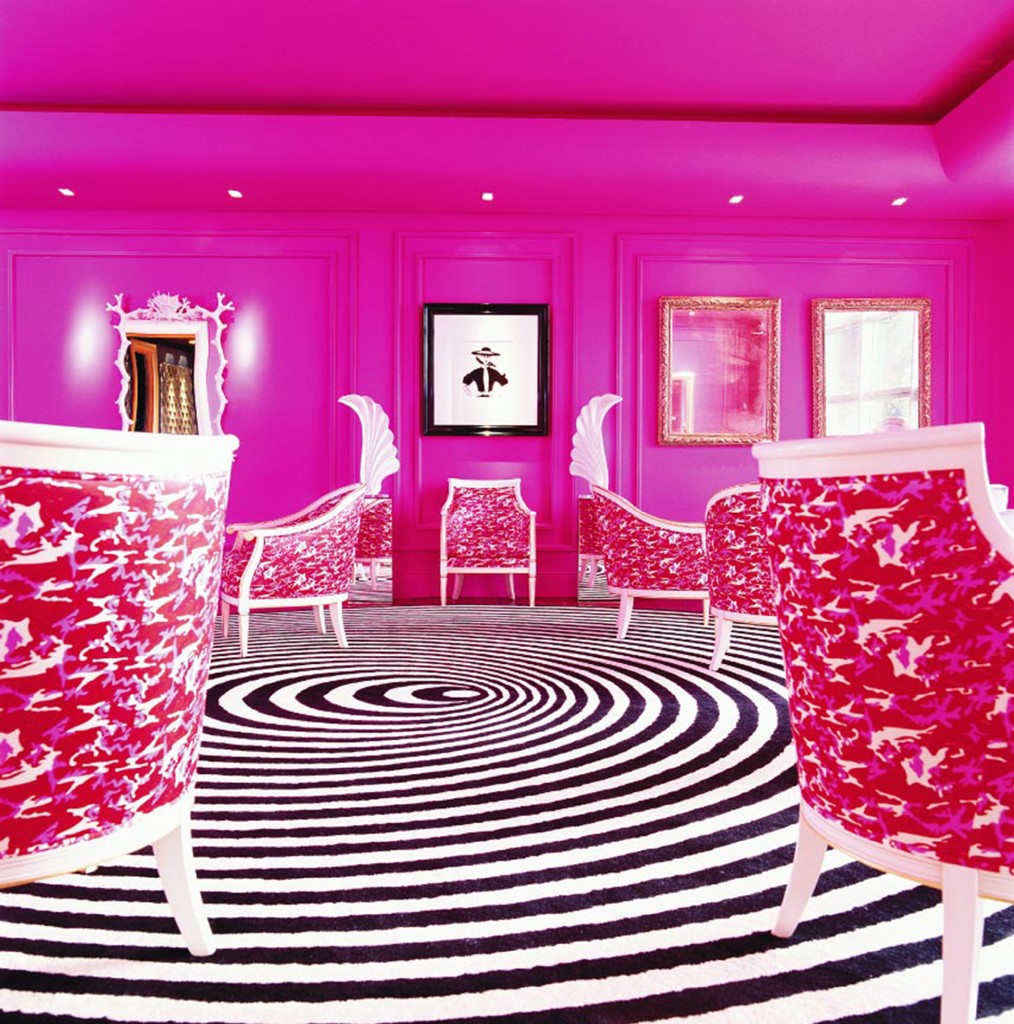 The lobby at the g hotel is like walking into a 19th-century French drawing room run through the blender of Tim Burton’s imagination. Designed by milliner Philip Tracey, the interiors are wildly bold (you may need to wear sunglasses if your taste is in any way conservative), but to their credit have remained amongst the most exciting in Ireland since their launch in 2005. Travel fashionistas may witness the black Venetian plaster and a seahorse tank in reception, Perspex tables filled with Swarovski crystals in the salons, and a raspberry carpeted catwalk linking the public spaces. If you can’t overnight, grab a pink champagne afternoon tea –just the ticket in these saucy salons.

If you build it, they will come. How else could you explain the presence of Marilyn Monroe’s ‘shocking pink’ Pucci dress, Dean Martin’s tuxedo or a pair of white gloves worn by Clark Gable in Gone With the Wind in Newbridge? There’s no lack of ambition (or quality) at Newbridge Silverware, where other displays include costumes worn by Greta Garbo, Maureen O’Hara, the Beatles and Liza Minelli. You’ll even find the red vinyl shirt and black fedora Michael Jackson wore during his last public performance in the US. It’s a fiendishly clever way of seducing you into buying the silverware downstairs.

Louis Vuitton is the last word in luxury luggage, so it makes sense for the designer’s home to become a travel destination in itself. There’s just one problem. The house is closed to the public, and accessible only by exclusive invitation. That, of course, instantly makes it as desirable as LV’s hottest new handbag. The secret museum is located in Asnières, about half-an-hour from the centre of Paris, and connected to a workshop where the goods are crafted. Several lucky fashion bloggers have posted pictures of the interiors – including lovely old steamer trunks, a fusty 19th-century dining room and a strangely blue fireplace. If you crack the code, let us know…

Maxed out by Macy’s? Browned off with Brown Thomas? Here’s a vintage dress shop in Portland, Oregon, that will re-inspire even the most jaded of clothes horses. For starters, it’s contained within a 1960s double-decker bus. Owner Erin Sutherland spent months restoring the old British beastie into one of Portland’s hippest boutiques, kitting it out with stock ranging from vintage sweaters to old magazines, dresses and cowboy boots. You’ll find it on the corner of Williams and Failing in the northeast of the city – together with everything a girl needs for an awesome outfit.