With Series 4 of Game of Thrones about to kick off, here’s a quick-fire guide to some of the top filming locations in Northern Ireland, where much of the series is shot. The locations are must-sees not only for GoT fans, but anyone who appreciates crumbling castles and mystical landscapes…

At Ballycastle, Gracehill House is an 18th century pile best-known for its Dark Hedges (pictured above). With a name like that, this swirling avenue of beach trees was duty-bound to end up in Game of Thrones – and sure enough, it’s found along Kingsroad – the grandest highway in the Seven Kingdoms.

The trees were planted by the Stuart family as a wow-factor entrance avenue to Gracehill House some 200 years ago and yes, there’s a ghost – the hedges are said to be haunted by a mysterious Grey Lady. Unsurprisingly, they’re one of Northern Ireland’s most photographed natural phenomena.

While many Seven Kingdoms’ scenes were shot at Belfast’s Titanic Studios, the production features its fair share of real-life landscapes too. Think of the 400-million-year-old caves at Cushendun, where Melisandre gave birth to the shadow baby in Season Two. The caves are easily accessible by foot.

30 minutes further west along the A2, you’ll find Larrybane (AKA Storm’s End), where a walk along the base of the cliffs towards Carrick-a-Rede Rope Bridge reveals more caves, together with epic views out towards Sheep Island. You may recognise the quarry here as the Stormlands.

The Causeway Coast crops up regularly in Game of Thrones – Ballintoy Harbour doubles as Lordsport, for instance. The approach from Ballycastle boasts sensational views – some of which you may recognise as Pyke and the Iron Islands. The Giant’s Causeway itself, a unique and famous basalt rock formation, is 15 minutes further along the coast and though it doesn’t feature in GoT, it’s a must-see. 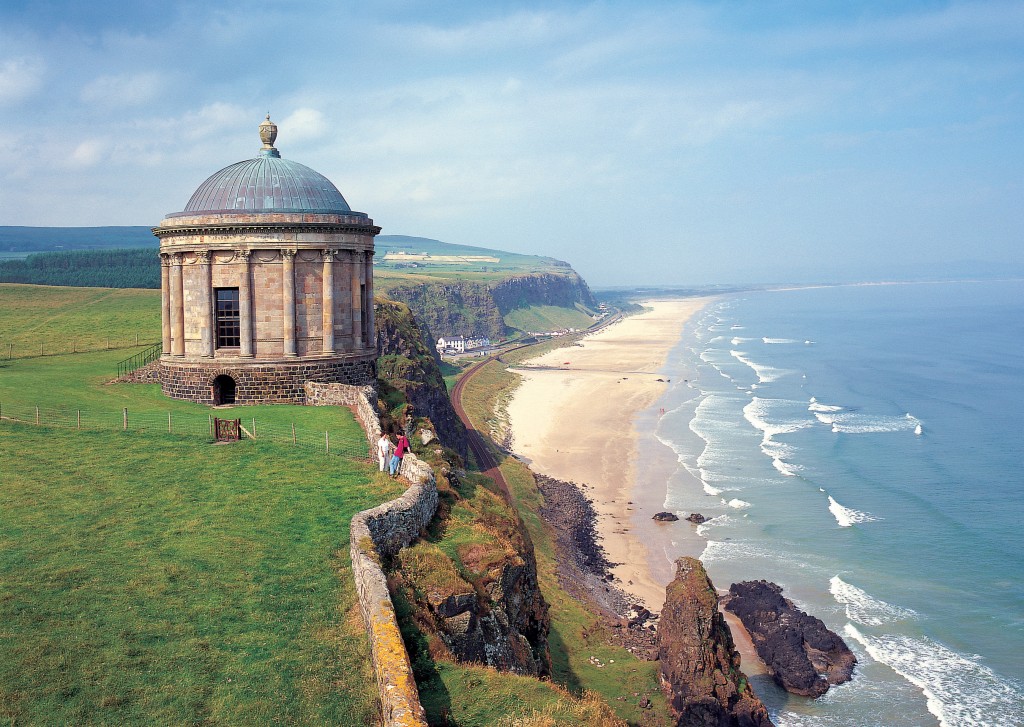 It’s one of Northern Ireland’s best beaches – an 11km stretch of sand overlooked by Mussenden Temple. Dating from 1785, this circular folly was inspired by the Temple of Vesta in Tivoli, and watches over a long swathe of golden sands (not to mention nearby Donegal). You’ll recognise the view as a dead-ringer for Dragonstone Castle, only with more romance and less dread…

This 18th century mansion, overlooking Strangford Lough, provided Westeros with two great Game of Thrones locations: Whispering Wood and Winterfell. It’s a weird and wonderful mix of classical and Gothic styles, with an 820-acre demesne full of exotic gardens, woodland paths and its own little farmyard.

Nearby Tollymore Forest Park, which appeared in the pilot episode, is another treat – with follies including faux-Gothic gate arches and a barn dressed up as a church.

McComb’s Tours transported the cast and crew to and from locations all over Northern Ireland. It plans to run Game of Thrones tours from April 2014 with prices from £35/€42.50pp. Private tours are also available. The Northern Irish Tourist Board posts regular special offers on its website.

Tourism Ireland has a three-day GoT itinerary here.

The HBO Game of Thrones Exhibition returns to Northern Ireland from June 11–15, 2014. It will be held in the Belfast Waterfront, focuses on the storyline and events of Season 3, and features over 100 original artefacts, including costumes, weapons, armour, set miniatures, storyboards and model dragons.