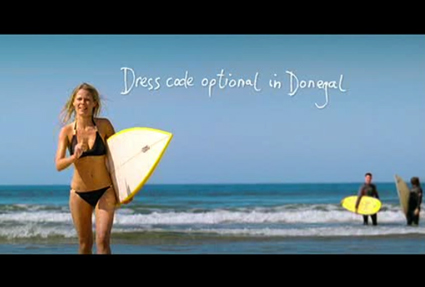 With research showing that the Irish consumer isn’t planning on holidaying abroad with anything like the frequency of our Celtic Tiger heydey (surprise, surprise), the aim is to reposition Ireland as somewhere exciting with lots to see and do.

Hence the focus on fun, with a 90-second ad featuring a bikini-clad model getting a dousing in Donegal, silver geese flambeing in the Tannery Cookery School, and a flirtatious bout of footsie under a restaurant table in Mayo.

“What’s for desert in Westport…” runs the script, as the camera cuts suggestively to a room key on a dining table.

Optimism was the order of the morning, with Failte Ireland’s John Concannon unveiling research that shows 61% of people now see Ireland as a good value destination, and that 74% of home holidays are short breaks (1-3 days).

Enough of the bad news, focus groups say. We want to have fun on holidays!

And whilst some findings seem a little – ahem – obvious (the “bling-bling” culture is gone; more people are using the web to book holidays), it was encouraging to see research confirm that consumer confidence is on the up.

The campaign kicks off  March 5th with a 90-second ad in cinemas. From there, it expands to TV (March 8th),  radio, press and online outlets.