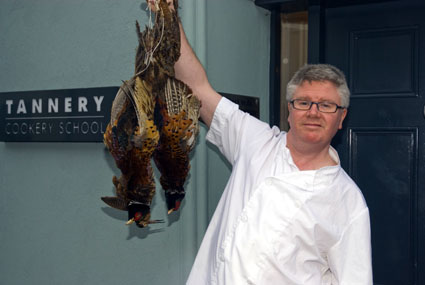 “In my dreams I’d love to be the mentor figure to a group of talented young chefs, but you have to generate the money to pay them. And you can only do that with customers.”

Paul Flynn is one of Ireland’s top chefs. But that’s no meal ticket.

With the Restaurants’ Association of Ireland (RAI) warning last week that closure is imminent for one-third of its members, the Co Waterford chef works 14-hour days just to keep his business alive.

Flynn and his wife, Maire, have been running award- winning Dungarvan’s Tannery Restaurant since 1997. In 2005, the couple added a boutique-style accommodation wing — the Tannery Townhouse — to their business.

A typical working day begins around 8am, with a phone call to suppliers. After that, it’s a flurry of menu consultations, committee meetings, food preps, meal services and cookery classes — a schedule that rarely concludes before midnight.

“If people are after losing their jobs, the last thing they’re thinking about is going out to a restaurant,” Flynn says. “But the net result is that business is significantly down. You just have to cut costs, hold on and pray.”

The Tannery is far from alone, of course. Some 200 Irish restaurants have shut up shop in the downturn, with Michelin-starred Mint among the high-profile casualties.

Long hours and hard work were always basic ingredients in the restaurant business. Now, they’re a matter of survival.

“Especially when you have a reputation,” Flynn says. “It takes very little to break a reputation. It’s very easy to make a mistake, and if a table of four is disappointed, they’ll tell all and sundry.”

Flynn clearly loves what he does, and points out that he is lucky to be in business at all. But he says custom — travelling trade, in particular — has slackened off hugely.

Like other restaurants, the Tannery has been getting creative with early birds and special offers, but with consumer spend a fraction of what it once was, the trade is facing another annus horribilis.

“The thing about cutting and cutting is that things aren’t getting that much cheaper for us.”

All of the staff have taken a hit –they’re on three- and four-day weeks now. But they’re good people, I want to keep them.”

In his busy schedule, Flynn is also stretched to find time for two daughters, Ruth (4) and Anna (3).

“We thought this restaurant of ours, stupidly, was our baby!” he laughs. “So we left it a little bit late before we had children. Then we discovered we really wanted them, and it maybe wasn’t as easy as it could have been.

“But we had them … and I don’t want to be an absentee father.”

He sees his daughters when he can during the week (“I might do the drop-in, sneak home for 10 minutes or half an hour, or Maire might bring them in to see me”) and family time is reserved for Sunday evening and Monday, when the business is closed.

Adding to the load is a new building bought and developed — to house several new bedrooms and the cookery school — at the “absolute peak” of the boom. “I’m fast-forwarding our life for the next year,” Flynn says.

Ireland is the most expensive place in Europe to run a restaurant, according to the RAI.

While restaurants have fallen on hard times, however, the industry is also perceived to have coined it during the boom. Sympathy is in short supply.

“Lots of people operated quite cynically when things were really good,” Flynn agrees.

“They were charging €28 for a main course and buying in most of the ingredients. They’re the people I don’t have a whole load of sympathy for. I don’t want to see anybody lose their job or their business, but that is what has given us the bad name.

“People don’t question how much solicitors or GPs get. I know they’re well-qualified, but so are chefs. We put hours and hours of effort into what we’re doing.

“Sometimes I think people in Ireland begrudge paying for food,” he continues. “But I don’t think people mind paying that bit extra if they get something they really enjoy and see the work that has gone into it.”

With that work only set to increase, would he consider another career?

“I wouldn’t change what I do, but by Jesus, it’s a difficult time at the moment.

“We get home, feed the girls, have a glass of wine and start thinking about new courses. It’s always work, work, work. Sometimes that can be hard on the romance of a marriage.

“The good people will survive. But they’ll struggle to survive.”

This article appeared in the Irish Independent on March 1st, 2010.