Is it possible to travel guided solely by Twitter?

That’s the challenge I set myself recently. So much of our travel is now inspired, planned and shared on social media, I wanted to see what would happen if I explored a city using only Twitter tips. No guidebooks. No websites. No listings. So I booked a flight to London, and sent a simple tweet.

I’m travelling around London today, guided only by Twitter… Got tips on what to see/do/eat? Pls RT using #LondonByTwitter!

That was the plan. And this is what happened.

Disembarking from my red-eye, I’m a bit nervous. You never know when Twitter users will embrace an idea or let it sink like a stone. But I needn’t have worried. I turn my phone on, watch the dots blink as it hunts for a network, and within 20 or 30 seconds, the first flood of recommendations comes in.

And it is a flood. In fact, it’s like a burst of code from The Matrix.

There are suggestions to see the top of The Shard, to attend a service in Westminster Abbey, to sample kick-ass burgers in Camden Town. There are obvious attractions like the Tower Bridge, and there are juicy insider tips, including a tour of abandoned Tube stations.

The ideas come thick and fast, leading to a momentary bout of option paralysis. When you can go anywhere in a city, where the hell do you go?

Normally, when I arrive in a city, I have a pretty good idea of what I’m doing. Here it’s the complete opposite. I haven’t even got a map. I gather my breath, scrolling back through the tweets. A couple of people have mentioned Borough Market, near London Bridge. I’ve never been, so chalk it down.

Twitter comes good again. The Tube is cheapest, several people tell me – offering amazingly precise and generous directions. But it’s also slowest. Even Heathrow Airport (@heathrowairport) chimes in, suggesting the express train or the Piccadilly line. Time is a factor, so I pony up for The Heathrow Express (@heathrowexpress). It takes 15 minutes to Paddington, at a wallet-spanking £34/€41.30 return.

Emerging from the Tube at London Bridge, I dive straight into the market. It’s a gorgeous compendium of artisan stalls snuggled under the tracks by Southwark Cathedral, and the smells are legion – cheeses, porchetta, paella and pies all snake right up my nostrils. Why haven’t I been here before?

I tweet looking for recommendations on what to eat, and get several replies – including one from Borough Market (@boroughmarket) itself – tipping a lemon curd doughnut freshly baked at the Bread Ahead Bakery (@breadahead). Sounds delicious.

Travel writer Catherine Mack (@GreenIrelandApp) makes a case for “the best brunch in London” at Roast (@roastrestaurant), but I plug for a chorizo roll with rocket and roast pepper at Brindisa (@brindisa). £3.95/€4.80 buys me a taste of Spain (below).

A quick sit-down gives me a chance to scroll through the latest tweets.

It’s amazing to see the variety of different users jumping on board. Some I know; most I don’t. There are walking tours (@londonwalks), restaurants and even a cinema (@ShortwaveCinema) recommending themselves. Retweets from Visit London (@visitlondon), Visit England (@visitengland) and Aer Lingus (@aerlingus), with whom I have flown, help spread the word to their tens of thousands of followers.

At one point, #LondonByTwitter is trending in Ireland.

Before I leave Borough Market, I join the queue for coffee at Monmouth. It’s been recommended by several tweeps – Anthony O’Toole (@no1culinarian), Tommy McGibney (@tommymcgibney) and The London Whistler (@londonwhistler) among them. It roasts coffee from single farms, estates and cooperatives, and has grown into a cult since opening its first branch in Covent Garden.

“This is f**king ridiculous,” says one real-life person in the queue. 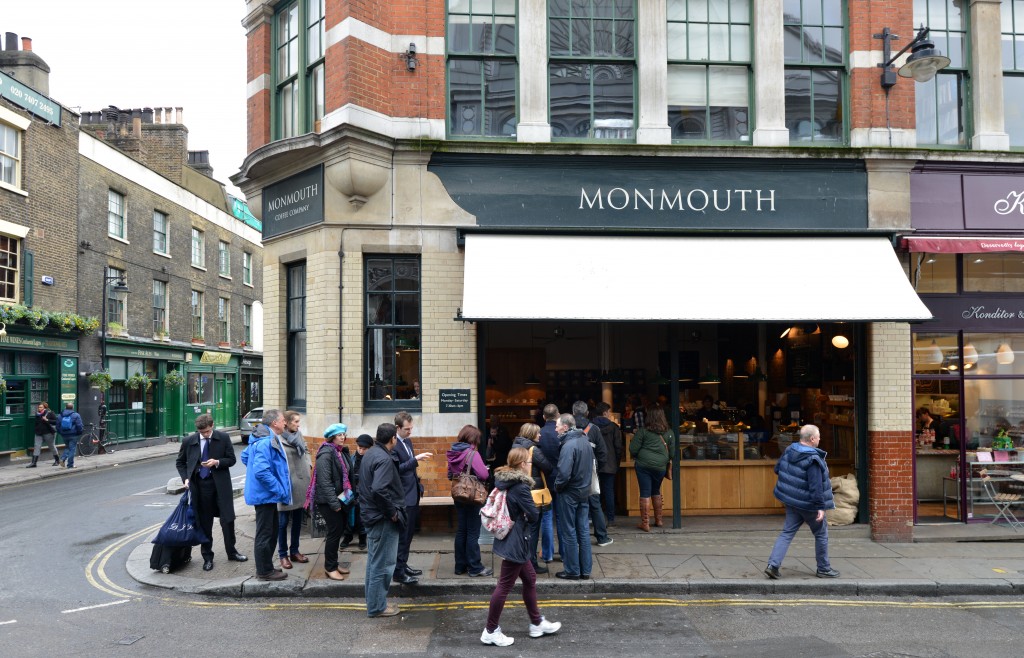 I tweet a photo of the line (above, the guy in a rush is looking at his watch).

It feels like I’m on a group tour! Thankfully, the line moves quickly enough, and Monmouth’s coffee comes up trumps. Supping it on a bench outside, watching London life go by, I realise that one of the things I’m enjoying most about my social media experiment is the personal nature of the suggestions. 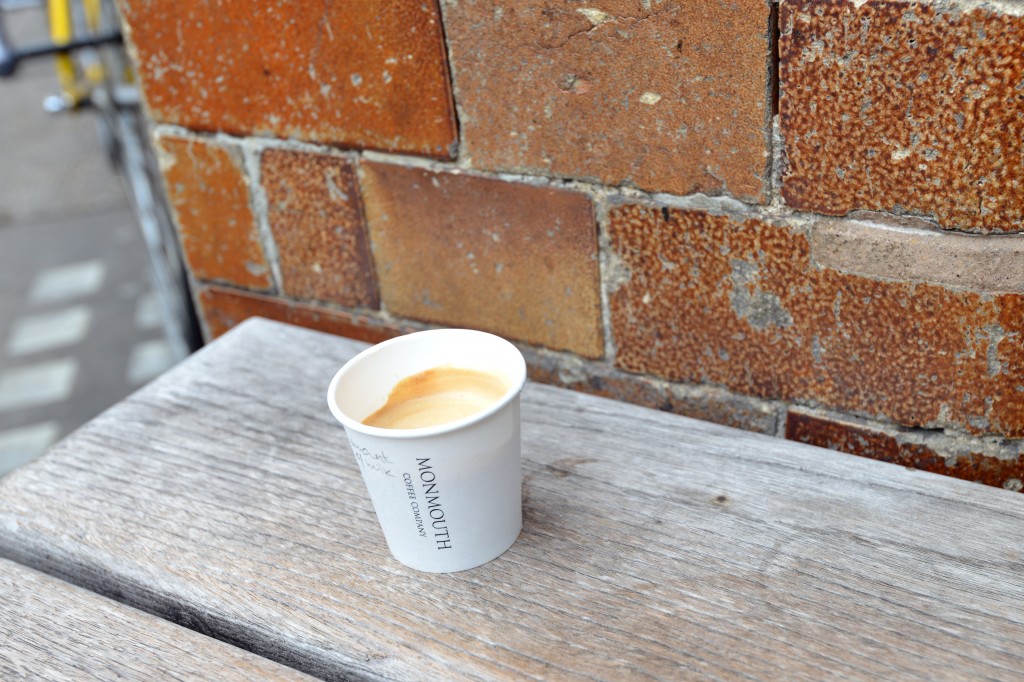 There is no chance of getting stuck on a gringo trail here. Of course the big hits get their tips, but far more of the tweets I receive are for personal favourites – a particular ice cream shop, a museum that brought back memories, a walk that would work given the weather on this very day. Nobody suggests Big Ben. 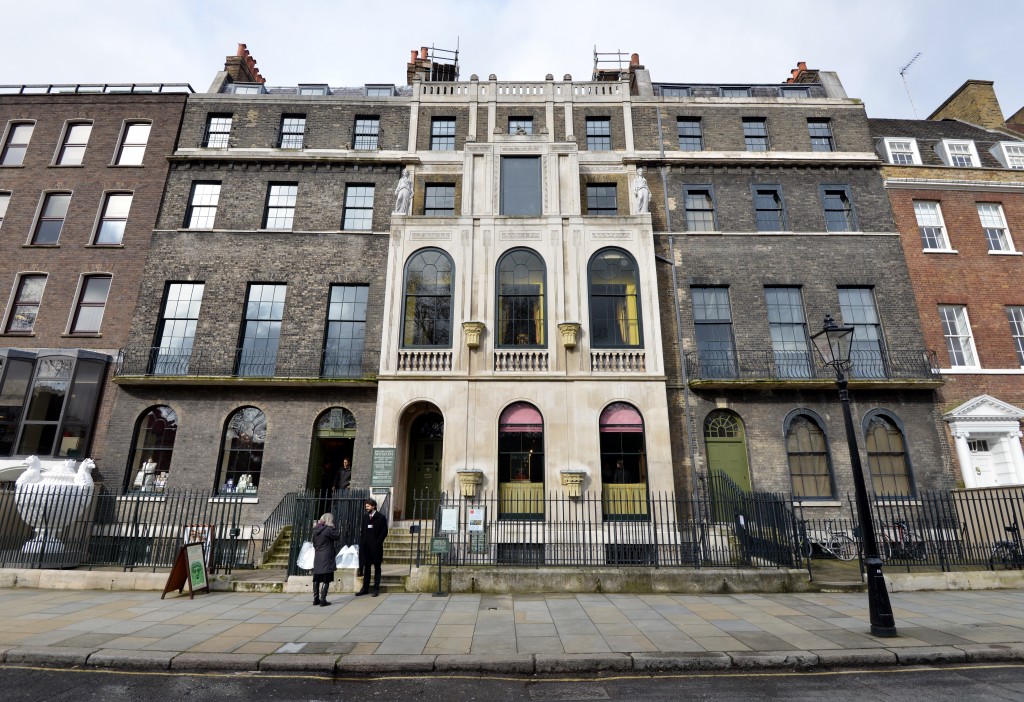 I’ve never heard of the Soane Museum, but it’s suggested by several users – including Etto (@ettomerrionrow), Janine Kelso (@janinekelso) and Dr J Walker (@drjwalker1). It’s also free, so I give it a shot. The museum was once home to the neoclassical architect, Sir John Soane, I learn – and turns out to be a textbook hidden gem.

The Soane Museum is as much a treasure trove of art, antiques, casts and curiosities as an exquisite lesson in the use of space. It’s absolutely jam-packed, with every available inch featuring a priceless artefact of some kind. It’s also the first time I’ve heard a hall described as a ‘prelude’ to the breakfast room.

By now, I’m coasting on adrenaline. It’s like throwing the word ‘London’ out at a party and keeping a list of what comes back. Lunch at the National Portrait Gallery? A pint in The Churchill? A wander down Brick Lane? Coffee in Soho? Did you know London is having a burger moment? That there’s an indie coffee map of the city, or that Gordon’s, near Embankment, is the oldest wine bar in the city?

By the same token, however, Twitter can’t do everything.

When I dip underground to take the Tube, for instance, my 3G connection dips too. I still need quick steers from Google Maps, and the roaming bill for my whole M.O. remains to be seen. Sure, there’s the odd bum steer and dodgy tone (“don’t listen to those Heathrow Express liars,” one user rasps), but that happens in real life too. And besides, if I don’t like a tip, I don’t have to take it.

One thing is unavoidable, however. My iPhone is running out of gas. By lunchtime, it’s down to 23% of its power. We both need a recharge.

I’m keen to explore a less touristy neighbourhood in London, and several people have tweeted about Shoreditch, so that’s where I head next.

To local hipsters, this East London hotspot may already have had its day, but I still enjoy the mix of glamour and grime. Smaller streets breaking off the thoroughfares are stuffed with boutiques, studios, and salons, there’s enough beards, graffiti and pulled pork to power Brooklyn, and a tweet seeking lunch tips draws suggestions ranging from Shoreditch Grind to Eyre Brothers and The Clove Club.

In the end, I go for The Hoxton Hotel (@thehoxtonhotel).

Inside, I’m greeted by an evocatively-lit, Instagram-friendly lobby. Brick walls are graced by steel bookshelves, halo-like chandeliers and a bustling grill full of red leather banquettes and funky bottles of Heinz ketchup. There’s free Wi-Fi, and a set lunch menu is offering two courses for £13.50/€16.40. I order a bowl of butternut squash soup and a plate of lamb chops, recharging several batteries.

@poloconghaile ooo Hoxton! We ran a workshop there once. The Arctic Monkeys wandered by & helped themselves to our delegates’ sarnies! — Blue Sail (@bluesailviews) February 28, 2014

That sounds pretty good to me, so I jump the Tube to Camden.

Chin Chin labs takes a bit of finding – it’s a tiny ice-cream parlour stashed just over the lock and under the railway bridge. Stepping inside, I find a young couple tinkering with vats of liquid nitrogen while Pretty in Pink growls from the stereo.

Camden is super-touristy, crammed with Sex Pistols t-shirts and bang-bang chicken stalls, but there’s always enough punk attitude (and actual punks) here to keep things a teensy bit real. The sci-fi sensibilities of this little shop do likewise. It claims to be Europe’s first liquid nitrogen ice cream parlour, and its flavours range from Pondicherry Vanilla to Valrhona Chocolate and Cherry Fizz.

I go for a very creamy vanilla with a few spoonfuls of raspberry sauce (£3.95/€4.80, pictured above). It’s as much fun watching it being made – the liquid nitrogen is used to freeze the ice-cream, before boiling away in a vapour cloud – as eating it.

@poloconghaile @johnpeavoy thanks for stopping by the lab, nice photo too! — CHIN-CHIN LABS (@ChinChinLabs) February 28, 2014 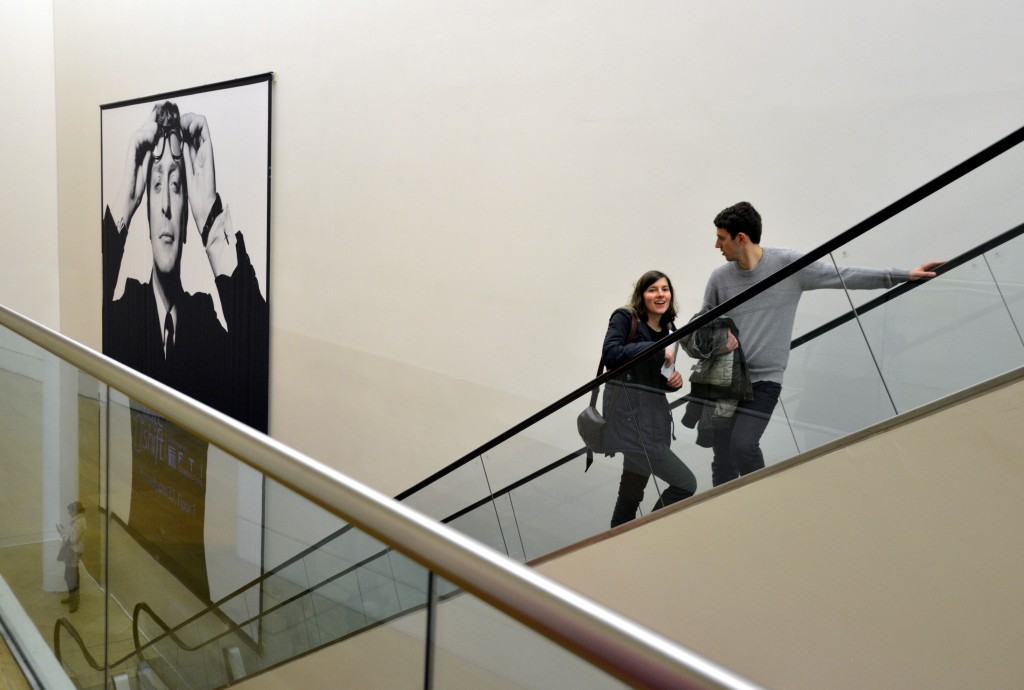 For my final stop, I want to take in a gallery or exhibition. Twitter obliges with several suggestions. Author Michelle Jackson (@mjacksonauthor) recommends the V&A, Sorcha DePaor (@sorchadepaor) tips The Tate and the Imperial War Museum, but ultimately I fix on David Bailey at the National Portrait Gallery.

I love Bailey’s big monochrome prints, and here are 250 of them. The Stardust exhibition is pricey at £14.50/€17.60, but the rest of the gallery is free, and it opens till 9pm on Fridays. Bailey’s portraits of Mick Jagger, Kate Moss, the Kray Twins and countless other celebs are electrifying, and I’m surprised to see photos snapped on a phone camera given equal space alongside the iconic 35mm and large format prints.

Boarding my Aer Lingus flight back to Dublin, I’m knackered. It’s been an exhilarating day, even though I’ve only been able to act on a fraction of the tweets. Twitter has its limitations, but #LondonByTwitter has been brilliantly liberating – not just driving my trip, but inspiring other users to start talking about trips themselves. That’s when it strikes me – this London By Twitter list could be used many times.

What do you think?