Why did the chicken cross the road?

I wouldn’t be surprised if it was to get to Nando’s. That’s where everybody else seems to be going. But why? How did a restaurant chain that feels like it was designed to house Colonel Sanders’ African art collection get so popular?

And Nando’s is popular. Head-scratchingly so. Cultishly so.

At the time of writing, it has over 1,000 restaurants worldwide – including seven in Dublin and one in Cork (at Mahon Point). David Beckham is a fan. Jay-Z reportedly requested its chicken at the Brits. Brian O’Driscoll tweeted a takeaway pic from his kitchen table .

Those are the type of celebrity endorsements that most high street brands – let alone family-friendly restaurants – would kill for. Nando’s black card, which entitles the bearer to free food, is one of the most sought-after in showbiz.

Does it even exist? “All we can tell you is that no-one who’s requested a card, no matter how politely, has ever received one,” it says.

So what gives? How did a peri-peri chicken chain peck its way into the heart of so many nations? We took a family trip to Dundrum to find out.

The first thing Nando’s newbies need to figure out is the ordering system. After being shown to their seats, customers choose their food, go to the counter to order and pay, and proceed to collect their own drinks, cutlery and sauces. Service is brisk and smiley, with meals brought to tables “as soon as chickenly possible.”

A funky, fold-out menu offers various chunks of Portuguese-style peri-peri chicken, a selection of sharing platters (with wings or whole chicken), as well as burgers, pitas, wraps and salads – with several appetisers, sides and extras.

We kick off with a scoop of hummus served with warm pita bread and a vial of per-peri sauce, together with a dish of olives seasoned with garlic, pepper, mushrooms and chilli. They’re decent portions, but decidedly mediocre. Given the €4.85 price tag, I’d imagine they’re among the menu’s more decorative items.

But let’s not kid ourselves. We’re here for the chicken. The idea for Nando’s was hatched over a plate of peri-peri chicken in South Africa. The dish itself sparked into life centuries earlier, when Portuguese settlers played with birds-eye chillies in Mozambique and Angola, but Nando’s has made it a household name.

It tastes pretty good, too. A quarter-chicken with chips and coleslaw is surprisingly moist and tender – flame-grilled to a standard you’d get away with in any foodie-friendly bistro. A butterflied breast and a chicken burger from the children’s (‘Nandinos’) menu are just as juicy and succulent. 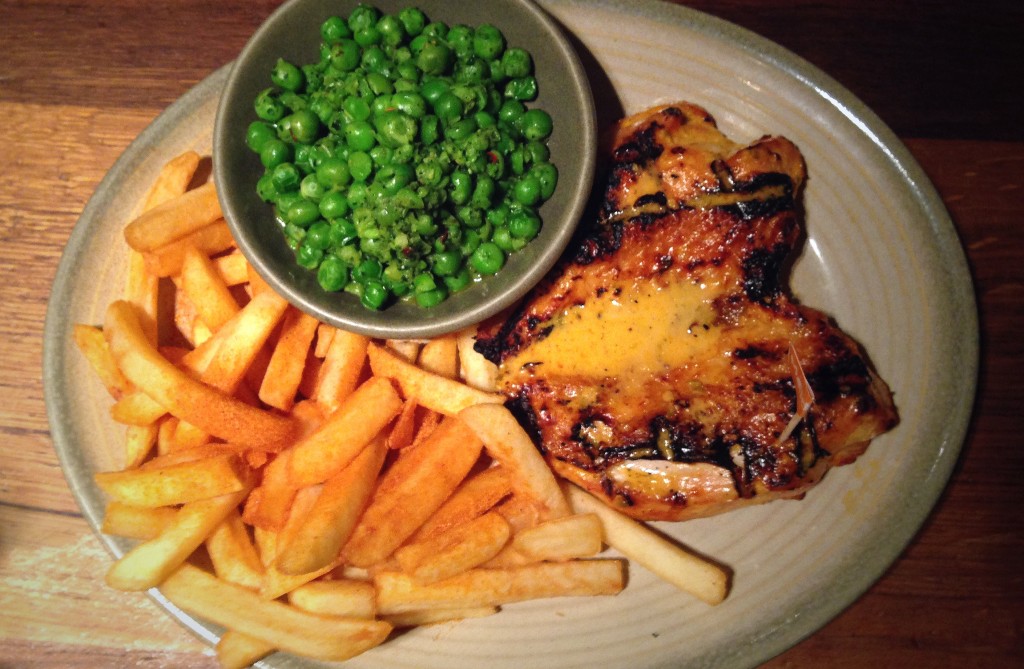 ‘Flavour’ is a word Nando’s fans use often. The chicken is marinated for 24 hours in peri-peri mixes ranging from ‘plain…ish’ through to ‘extra hot’ (described as “like tackling a ferociously fiery dragon in a furnace,” but in reality more of a tongue-tickler). The sauces don’t have any great depth or complexity, but they are certainly spicy, and they are certainly finger-lickin’.

The sides work too. A pea dish with chilli, mint and parsley carries a wonderfully fresh bang, and it’s worth splashing out an extra 15c for a dusting of peri-peri salt on your chips. All of the bits and pieces (not to mention the Sagres and sangria) can add up, but the basic quarter-chicken with two sides starts at just €9.95.

Nando’s chicken is farmed in Ireland, the chain says, meeting “high standards of food safety, animal welfare and environmental protection.” It’s neither organic nor free-range, but it is delivered fresh and flame-grilled in front of your face.

We also order an avocado and green bean salad with extra hot chicken strips (above top, €13.40). Pillowy strips of avocado sprinkled with toasted seeds make for the prettiest dish of the evening, but it’s also pretty forgettable – as is the pastel de nata, a traditional Portuguese custard tartlet. It’s far too eggy, with a pastry cup that is chewy and gummy rather than flaky and crisp. It doesn’t travel. 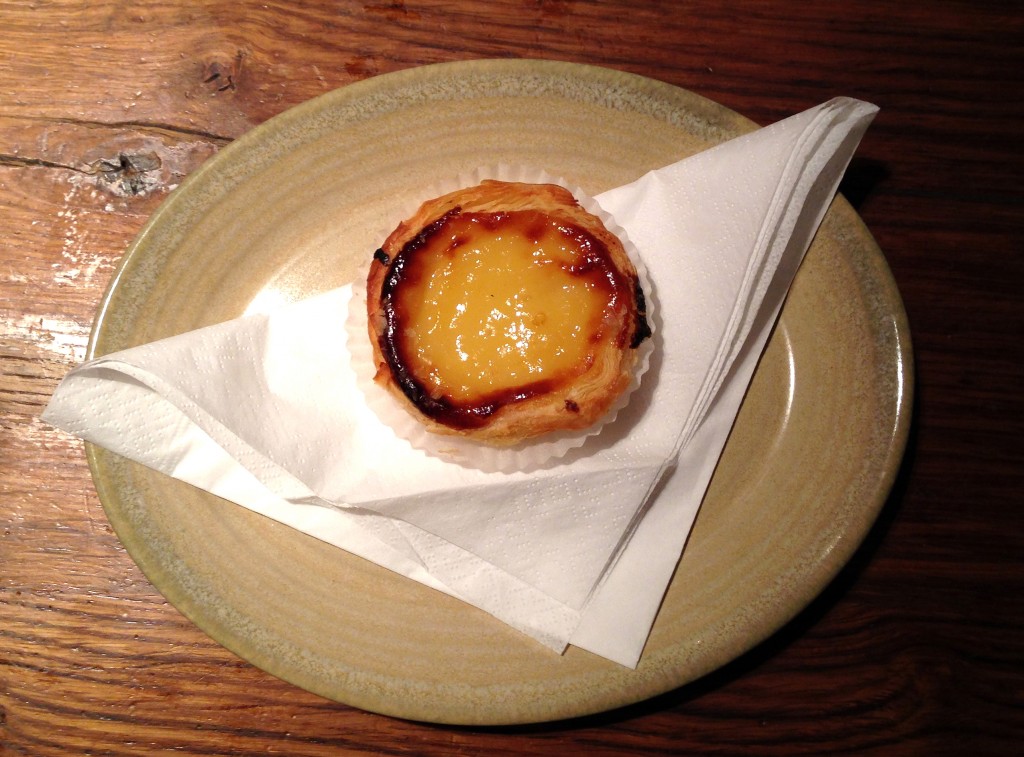 Overall, I’d rank Nando’s below Jamie’s Italian and Crackbird, on a par with Wagamama, but a solid cut above many bland burger joints. It’s a slick operation, I love the splashes of original South African art, and free refills of frozen yoghurt and fizzy drinks appeal to everyone from teens to couples and families.

Dinner for two adults and two kids with one beer came to €56.65.

Nandos Review: This review first appeared in The Irish Examiner.