Juan Mari and Elena Arzak must have the longest mantelpiece in San Sebastian.

Their restaurant has held three Michelin Stars for a quarter of a century. It ranks eighth on S. Pellegrino’s World’s 50 Best Restaurants. Last year, Elena was named Best Female Chef in the World by Veuve Clicquot. Together, this father-daughter team are the Coppolas of the culinary world, icons of New Basque Cuisine – chefs whose business card requires no more than a surname.

Getting a table is difficult, then. But I got lucky. Before travelling to San Sebastian, I chanced my arm asking for a cancellation. They had one, so I took it. Three days later I was sitting in the inner sanctum of this Spanish foodie shrine, holding a €179 tasting menu in my hands.

The rooms are sleek, toned with frosted glass, svelte greys and blacks, panels of exposed concrete slotted with the indents of spoons. Fifty or so diners sit over two floors in reverential hush, titillated by the sacrament they’re about to receive. Everyone is looking spruce; many are speaking English.

The waiters move suavely, swiftly – human cogs in an immaculately-oiled machine. They offer advice on wines, give personal recommendations, ask pointed questions to ascertain your tastes. Do you like eggs? What about foie gras? The tasting menu can be tweaked, they say.

A medley of appetisers appears. A bite-sized ‘Chorizo with tonic’ comes atop of a crushed can of Schweppes. ‘Red codfish’ is served on a plate made of pebbles; ‘Bitter raspberry’ in a bottle buried in a bowl of ice. It’s stopped with a cork of white asparagus and the thinnest sliver of mushroom.

One playful presentation follows the next. ‘Cromlech with onion, coffee and tea’ (pictured being assembled, below) looks like two yellow cardinals’ hats made of crispy manioc (cassava). I’m instructed to lift them with a spoon, flip them over, and eat “like an ice-cream, with the hands”. The crunchy shell gives way to a gooey mix of onion, green tea and foie gras. Each mouthful brings several textures and flavours. 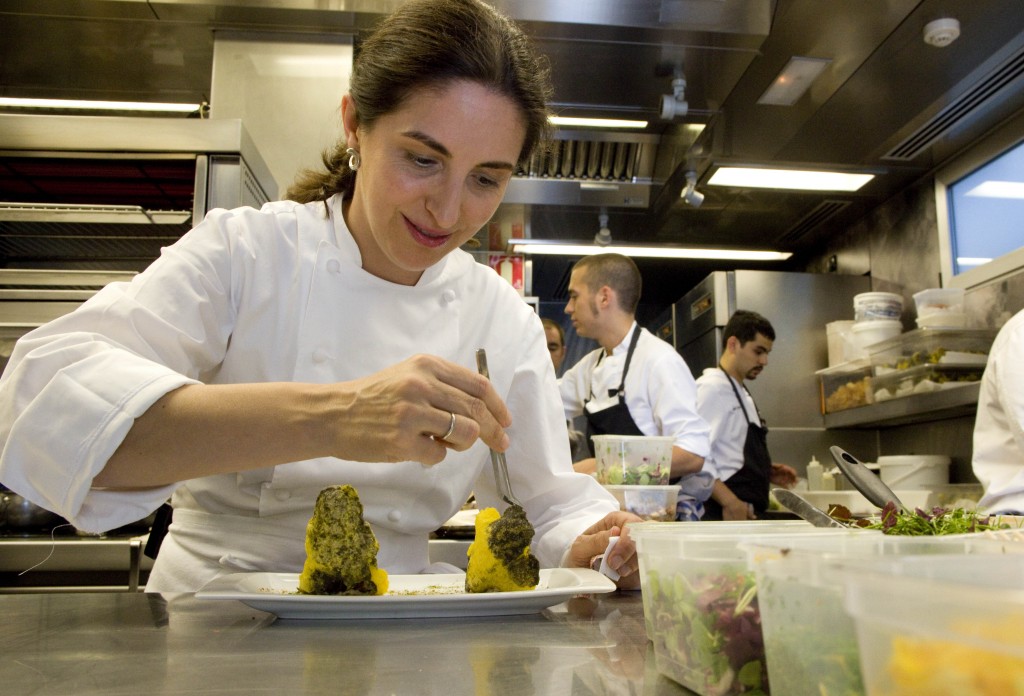 Such experiments will not be to everybody’s taste, of course. One man’s exquisite balancing act is another’s expensive joke, and the there are times (as there are in the Fat Duck, or were in El Bulli) when complexity sails dangerously close to comedy. ‘Hemp, mustard and lobster’, for example (pictured below), is served atop of a tablet playing footage of ocean waves. There’s a theatre to it, but the addition of audio and video is too literal for my taste – breaking the spell of suggestion.

The sautéed lobster itself, however, is sit-up-in-your seat good. Each bite carries a depth of flavour that makes me at once want to savour it for half an hour, and gobble it up on the spot. 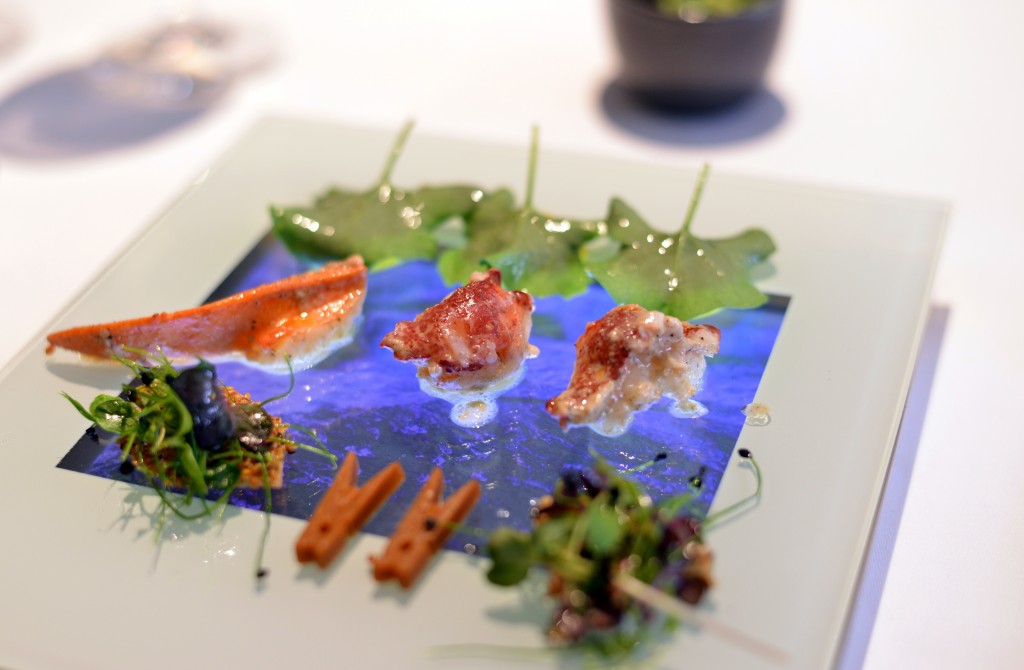 Similarly, Monkfish ‘Green Witch’ arrives beneath a bright green balloon crafted from rice and seaweed. The waitress breaks it with a spoon, causing green flakes to scatter around the roast monkfish within. When I slide my knife in, the fillet parts like butter. It’s delicious. 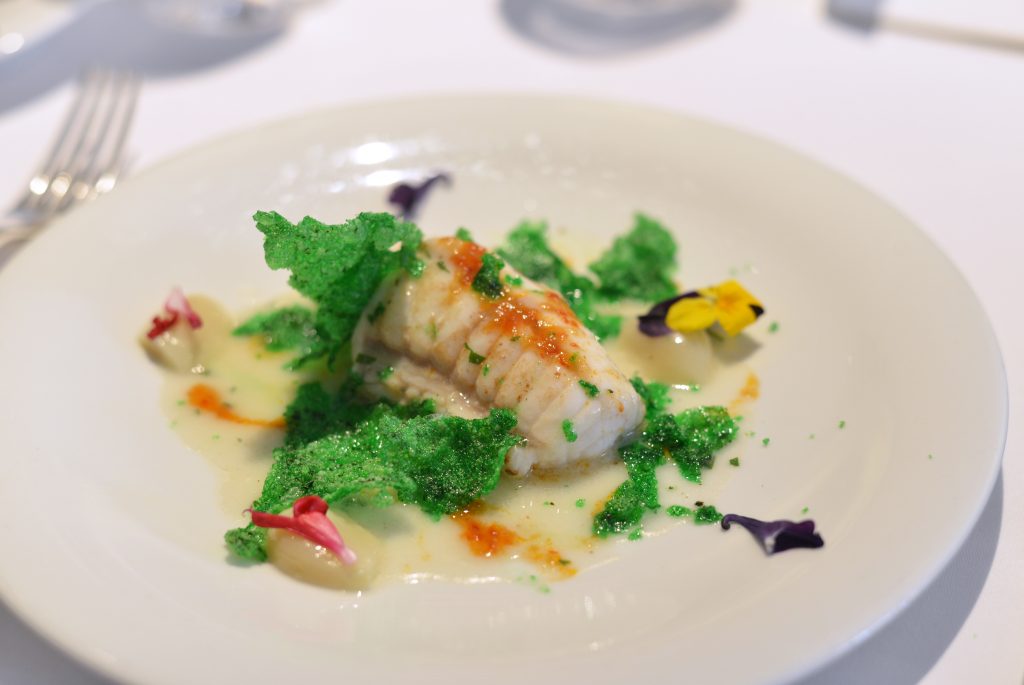 This is food as art, and there are moments when the elaborate dishes and heightened service feel slightly intimidating. But there’s a family story at the heart of it all. Arzak began in 1897 when Juan Mari’s parents turned a simple restaurant into a hub for local baptisms, weddings and communions. He began working side by side with his mother, adding twists to traditional techniques, experimenting with Basque fish, meat, vegetables and cheeses. Today, he works in tandem with his daughter.

Both are visible, too. During lunch, Elena makes her way around the tables, talking me though ‘Light ovolacto’, a medley of poached egg, powder from the fruit of the baobab tree, various curds and ‘lactic leaves’ that have a surprisingly cheesy taste. “It’s like the Milky Way,” she says.

Desserts include ‘Golden footprint and ladybird’, with caramelized fruits served beneath black sesame bread cut to the shape of a footprint (its pattern is painted gold). At its centre is a ‘ladybird’ dotted with liquorice spots, and surrounded by sugary sprinkles of crystallised olive oil. 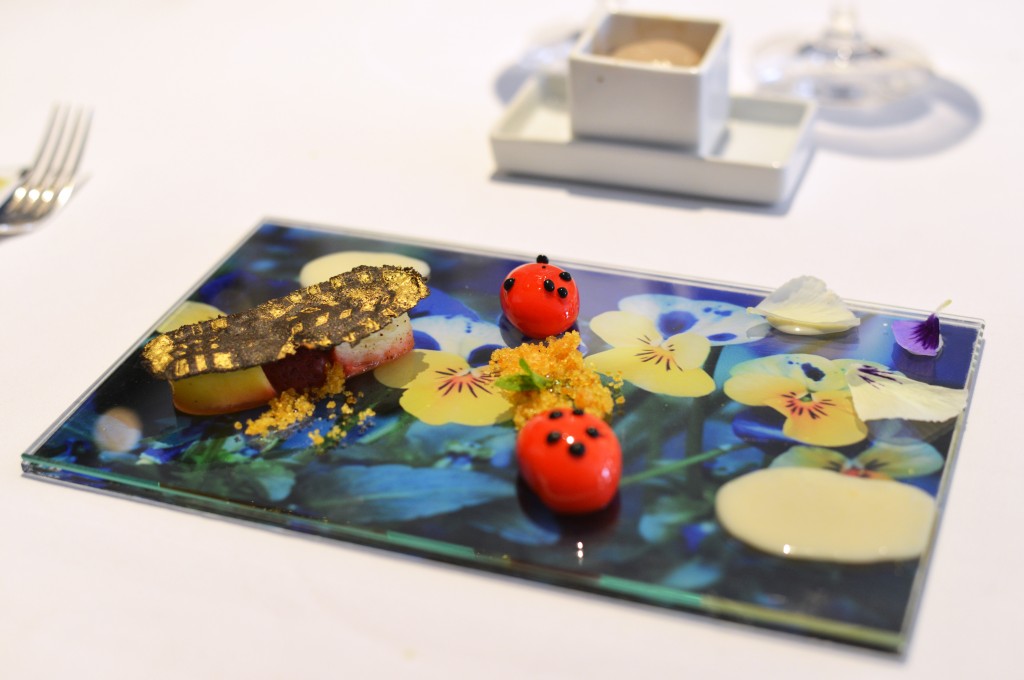 It’s an intoxicating meal. But for all the crushed cans and edible footprints, Arzak’s best trick is its refusal to stand still. For all it has achieved, the menus keep evolving (above the dining room, there’s a research laboratory stocked with hundreds of different flavours). The technical brilliance continues to be enlivened by restlessness, curiosity and fun. The chefs do not rest on their laurels.

And needless to say, awards continue to clutter that mantelpiece.