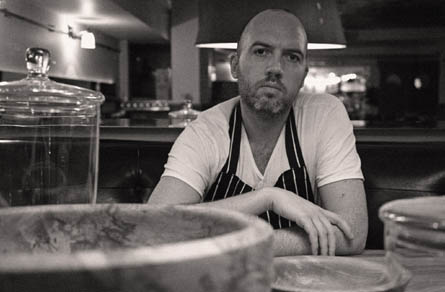 Whatever Rustic Stone is, it’s clear what it isn’t. It isn’t Mint.

Mint, the Ranelagh restaurant in which Dylan McGrath made his name during the giddy boom years, is by now a Celtic Tiger cautionary tale. It blazed like a comet across Dublin’s culinary firmament, wowing critics and winning McGrath a Michelin Star (and a reputation as the psychotic genius of Irish celebrity chefs) within a year.

McGrath was a bully in the kitchen, but his cooking could be exquisite – evoking that great scene in Ratatouille when the sheer deliciousness of Remy’s dish shocks the dour food critic into sentimentality. At its best, it tasted emotional.

Then the economy tanked. Mint closed, and McGrath went to ground.

Rustic Stone has learned the lessons. It does more covers than Mint. Staff float about in brown waistcoats and collarless cotton shirts. A casual room is kitted out with stripped wood, parquet flooring and earthy tones.

Then there are the prices. The most expensive order is a 10oz sirloin at €31. ‘Bites’ start from €3.50, and the duck and beef sandwiches – yummy little teasers oozing herbed goat’s cheese – are, at €4.75, amongst the best value in Dublin.

You get the picture. It won’t win any Michelin stars. But it doesn’t set out to, and that’s a hugely exciting prospect with such a congenitally talented chef.

To kick off, my wife Lynnea and I shared a small portion of butterflied prawns served on a salad of bean sprouts, coriander, pepper and sliced ham (€7.95). I liked the smoky, charred taste, but Lynnea rued their dryness – she would have preferred the dish cooked in butter or oil (though in fairness, it was billed as low-fat).

We ordered a pick n’ mix of ‘bites’ too, including the duck and beef sandwiches and a couple of salted cod sticks wrapped in thin slices of cured ham and served with a sweet onion and crème fraîche dip (€3.95). Again, excellent value.

For mains, Rustic Stone offers a wide choice of pastas, steaks, burgers, salads and sides listed with annoying flourish (‘posh pesto’, ‘boisterous beetroot’ et al.). Coloured symbols mark each as gluten-free, vegetarian, low-fat and so on – something that felt unnecessarily cluttered at first, but we soon got the hang of.

We went with steaks – beautiful cuts of meat with just the right combo of give and chew, served with a theatrical sizzle on volcanic stone slabs.

Mine was a 9oz rib eye dripping with prawn glaze and a tarragon-heavy sauce. Going with the concept, I cooked it myself by slicing off chunks and searing them on the super-hot slab. It’s ironic, paying Dylan McGrath €27 to cook a steak yourself, but you could skip the gimmick and order it cooked if you wish.

The wine recommendations were on song – a glass of Chateau Plain-Point ‘Angelique’ (€5.75) was just the ticket with the rib-eye – but the chocolate soup with chocolate mousse (€9.50), which we shared for dessert, fell flatter than the description.

The menu made a virtue of the fact that it was sugar-free (“for all the ladies”), but to our minds, that freed it from too much of the deliciousness too.

The service was laid-back but sure-handed. Yes, the staff tended to fawn over the chef (“I just don’t know how Dylan does it,” we were told), but the cooking concepts were well explained and when we confessed to finding the polenta chips (€4.25) too stodgy for our taste, they were immediately taken off the bill.

All told, Rustic Stone is a hugely exciting addition to Dublin’s restaurant scene – McGrath has mellowed, and the prospect of a value-conscious menu cooked by one of the best natural cooking talents on this island will keep business flowing in.

Mint, it ain’t. And that’s no bad thing.

Our smorgasbord of bites, starters, steaks, sides, desserts and wines came to €107.90 before tips. But you could easily fill up on less, or splash out on more.