The Celtic Tiger may be dead, but a very similar beast is prowling about The Chop House, a gastro-pub serving steaks from €26 a cut on Dublin’s Shelbourne Road.

Arriving at 8.30pm on a midweek evening, we found the joint absolutely hopping. Every seat in the lounge, terrace and sun-splashed terrace was taken, with second sittings perched in anticipation at the bar. That’s remarkable in this day and age, and I got the feeling that most customers were regulars.

It’s not easy to carry off a busy night with aplomb, of course. And that’s where the shallower and less endearing side to this Celtic Tiger began showing its claws.

Seating us temporarily at the bar, the host disappeared for several minutes before taking a rushed order for a drink – from one of us. After taking our table, a beautiful spot overlooking the crossroads of Bath Avenue and the Shelbourne Road, we put in an order for the second drink, a glass of Pinot Grigio from Monte di Cello. 15 minutes later, our starters arrived, without the wine.

Finally, after catching the attention of another waiter, the wine arrived (and very nice it was, too). But the service continued to be delayed and dozily disinterested throughout. I had to ask twice to find out what was in a particular ingredient. The scoops of ice-cream I received were different to those I ordered. A broken till meant we couldn’t get an itemised receipt. And so on.

It felt like 2006. Aside from a tempura-battered fish n’ chips for €15, mains at The Chop House start from €24, and the cheapest glass of wine is €6.50. It’s definitely more ‘gastro’ than ‘pub’ (with D4 customers, I can only imagine the turnover on match days at the Aviva). For those prices, shouldn’t we expect wait staff that know their menu, remember their orders and value their customers?

Thankfully, despite the shambolic service, the food came up trumps. Beef is taken seriously here, be it a 10oz Limousin rib-eye at €26 or a Porterhouse for two at €60. It’s dry-aged for at least 32 days too, a process that concentrates flavour and tenderizes the meat, making for some very tasty steaks.

My Prime Herford rib-eye (€32) came on a wooden chopping board, with a roast tomato, Portobello mushroom and chutney on top, and hand-cut chips on the side. The steak was cool on the fringes, but was plainly a decent cut afforded the respect it deserved. The chips, however, were a bitty, end-of-basket portion that shouldn’t have been allowed to leave the kitchen. 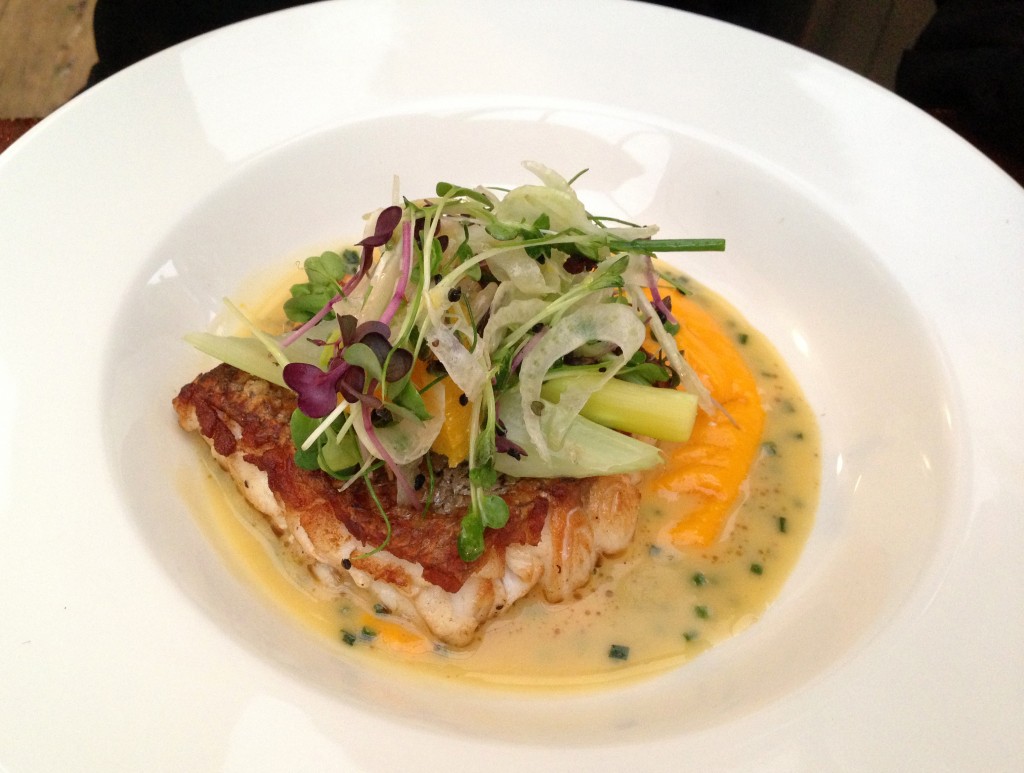 L went for the pan-fried fillet of hake (pictured), served with carrot and ginger puree, spring veg, lemon and herb jus and a fennel and orange salad. The fish was flawless, its succulent flesh cuddled up inside a crispy crust, and lots of citrusy notes and crunchy bang in the accompaniments. Rabbit, braised pork belly and chicken were also on the menu, with monkfish and lamb on the specials board.

Top marks went to the starters, in terms of pure flavour and composition. My tuna sashimi was velvety in texture, with a sticky Teriyaki glaze (it reminded me of Japan), a perfectly-cooked quail’s egg and cucumber pickled with star anise. The dish (pictured, top of page) was beautifully arranged on black slate.

Likewise, a warm salad of asparagus with Alsace bacon hit all the right buttons. The asparagus gave way without loosing its pleasing green crunch, and a light herb dressing whacked of summer. 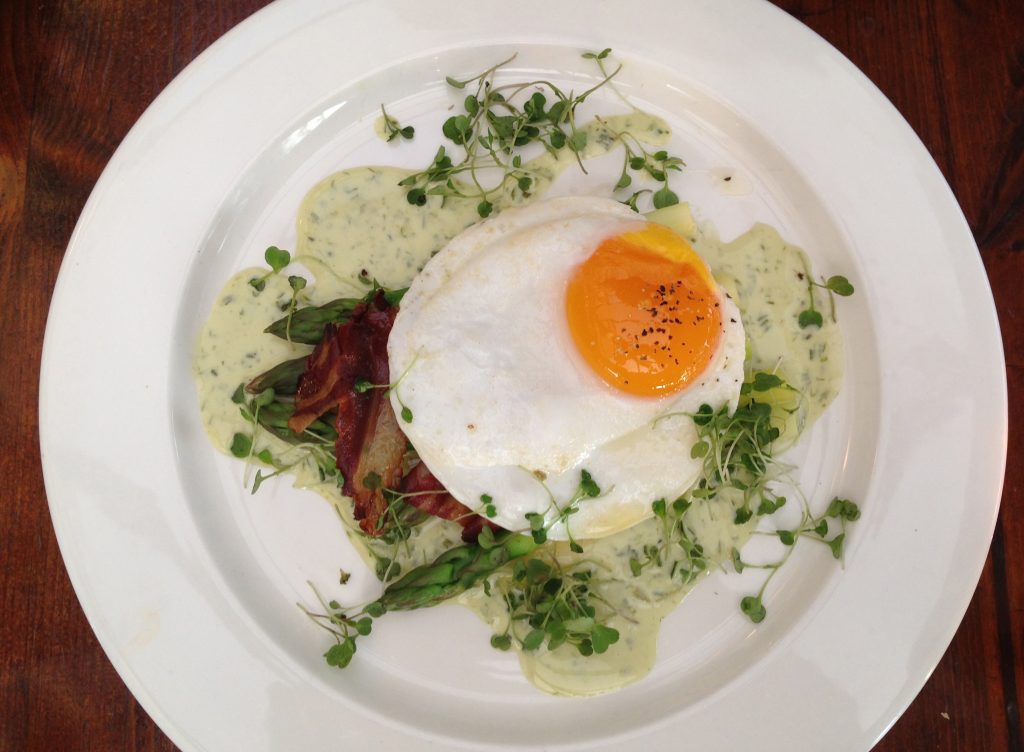 There’s a decent wine list at The Chop House, and its cocktails and cheeseboards are bang on trend. A playful selection of desserts was fairly priced at €7 a pop, with the highlight an intriguing pineapple option roasted in seven spices and served with lemon ice-cream. Or what about West Cork ricotta with orange doughnuts?

The Chop House dished up “the best f**king meal I’ve ever eaten in Dublin,” according to New York’s infamous celeb chef, Anthony Bourdain. I can see why he liked the swagger of the place. And based on food alone, Kevin Arundel and Jillian Mulcahy’s is one of Dublin’s top gastro-pubs.

But there’s so much more to dinner than food alone. With prices like these, The Chop House should feel like an inspired mix of French bistro and Irish pub, not a noisy conveyor belt. It should make customers feel like gourmets, not greedy gourmands. What’s missing, I think, is a human touch, a front-of-house presence that ties the talent in the kitchen to a meaningful experience at the table.

True tigers know when to roar, and when to purr.