Winding towards The Inn at Ballilogue Clochán, a restored cluster of cottages 10 minutes outside New Ross, the roads twist and turn exactly as they would have done 50 years ago. Pulling through a thin gate, however, we’re confronted with a beautifully lit stone farmhouse. Inside a large, floor-to-ceiling window, we can make out lamps, coffee table books, buns spiked with lemon curd.

The middle of nowhere never felt so cosy.

The Inn at Ballilogue Clochán is the brainchild of Irish designer Pat McCarthy, and an impeccable mix of contemporary and country styling. You’ll find flatscreen TVs, French doors and copies of Frieze magazine alongside exposed stone, baskets of turf and antique dressers, for example – with fresh wildflowers and painted silhouettes of trees blurring the lines between inside and out.

I love the subtle lighting and lush, rustic colours – an autumnal brown here, a red fabric lampshade there. As a creative vision, a combination of old outbuildings and eye for detail, you wouldn’t be surprised to see cropping up in the pages of Condé Nast Traveler.

There are six double bedrooms in total at Ballilogue (with four in the largest building, the farmhouse), all with private bathrooms and decent-sized beds. They’re named after people whose homes lay within the clochán (Irish for an ancient rural habitat): Paddy, Maggie, Mrs. M, Kitty and so on.

McCarthy’s savvy design hand is in evidence here too, marrying creature comforts like rainshowers, dimmer-switches and chaise lounges with earthier features like woven throws, vases splashed with hedge flowers, and books on everything from The Burren to Elliot Erwitt.

Ballilogue runs a café serving light snacks and homemade cakes on Saturdays and Sundays from June to September (1pm-6pm). Guests looking for dinner can also avail of causal dining at the Inn on Fridays and Saturdays in peak season. Not wishing to cook, that’s an option we took.

Our meal was served up in the cottage kitchen, with its centrepiece a creamy chicken bake riddled with broccoli and topped with sunflower seeds. Mark, the manager, moved in and out with a good feel for when to chat and when to leave us to ourselves, whisking away the empties, making the wash-up magically disappear. Afterwards, we gorged on raspberry roulade.

It’s all tasty, home-cooked fare, with just enough flair to the dishes to feel like a treat. Breakfast was yummy too, with pancakes and blueberries, French toast, or scrambled eggs with smoked salmon just a few of the temptations offered by Mark in the morning. 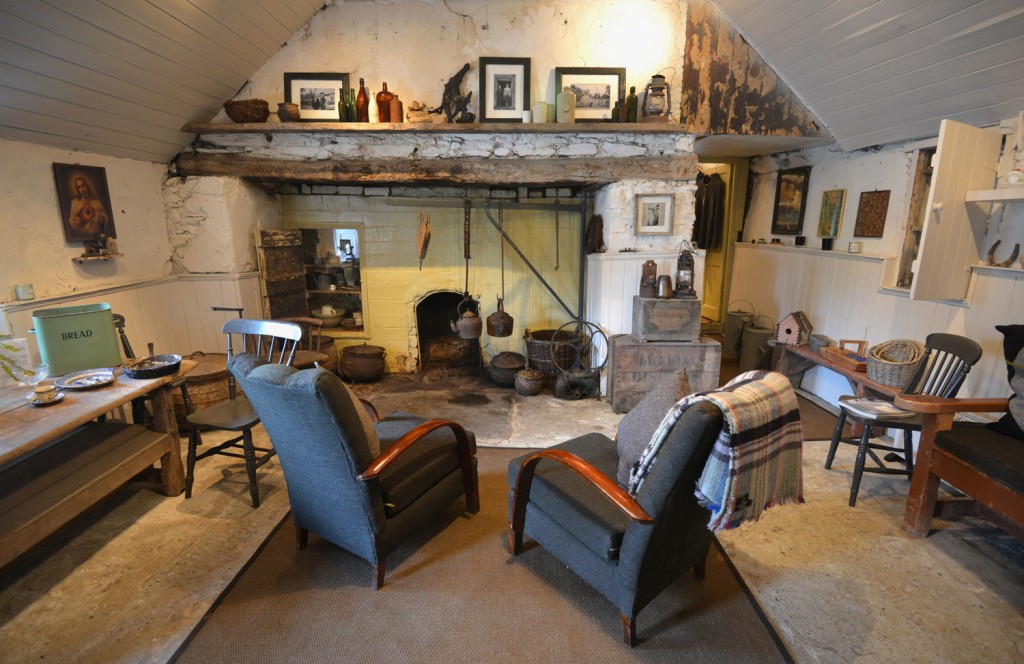 This 18th-century cottage has been turned into a museum, preserved almost exactly as it was when Mrs. Meaney passed away in her 80s. An enormous hearth, blackened kettles hanging off an old oak beam, a settle bed, bellows, holy shelf and picture of JFK and Jackie are just some of the irresistibly authentic furnishings taking you straight back to the 1960s… and beyond.

Ballilogue also runs a small crafts shop, with goodies ranging from designer throws and scarves to homemade jams and Voya bath products. It’s like a mini-Avoca.

Overall, this is a first-class country bolthole, a beautiful use for buildings that would otherwise have been left to crumbling in the fields of rural Ireland. We found the house slow to warm on a chilly evening, and Wi-Fi didn’t work in the bedrooms, but everything else was spot on.

The 50th anniversary of JFK’s visit to Ireland passed this summer (2o13), and you’ll find mementoes all over Cunty Wexford. Along the quays in New Ross, a bronze statue has being joined by an Eternal Flame lit from Arlington Cemetery, for example.

Also on the quays, the Dunbrody Famine Ship (dunbrody.com; €8.50/€5) uses a replica 1840s barque to tell the story of Irish emigration. Visitor tickets mimic old passenger contracts, costumed actors talk about the arduous 45-day crossing, and an Irish America Hall of Fame reminds us that a ship like this would have borne Patrick Kennedy, JFK’s great-great-grandfather, to America in 1848.

Finally, the Kennedy Homestead in Dunganstown (kennedyhomestead.ie; €7.50) has re-opened after a major refurbishment. This is where Mary Kennedy Ryan dished up homemade bread and copious cups of tea to the President in 1963, and its cultural museum celebrates Kennedy’s Irish links with the countryside still farmed by his relatives. I can’t wait to see the results.

For more on Wexford and JFK, see jfk50ireland.com and visitwexford.ie.

The Inn at Ballilogue Clochán has two nights for two adults, including a bottle of wine and local cheese platter, from €149pps. Contact 053 423-857 or ballilogueclochan.com.