There is an ancient Chinese blessing – ‘May you live in interesting times’.

Except that there isn’t. In truth, the phrase is neither ancient, Chinese, nor a blessing. It was made famous by Robert F Kennedy in a speech in 1966, has no direct Chinese translation, and is meant ironically. To live in ‘interesting’ times is, of course, a curse.

Well right now, hoteliers – like the rest of us – are cursed. Finance is hard come by, and interesting times have been overrun by zombies. New openings are few and far between.

But what’s this? After lying idle for years, a flash new five-star hotel has opened in Grand Canal Dock. The Marker is Dublin’s first major opening in years, and it looks decidedly like a blessing. 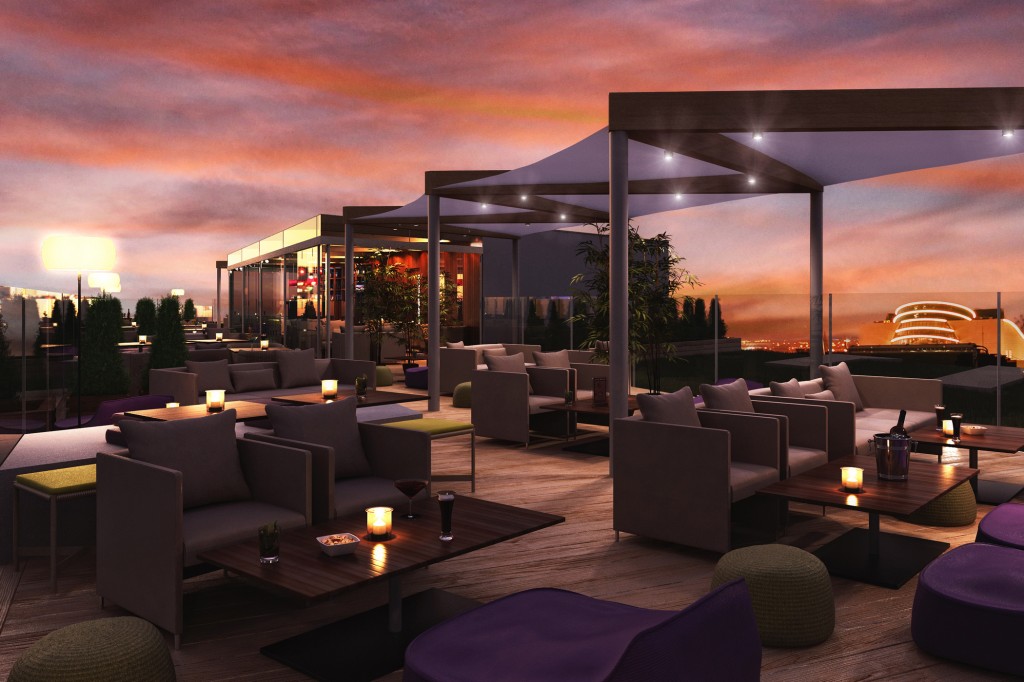 Pulling up outside The Marker’s chequerboard façade, we find a design hotel in sparky form. These are the first weeks of a soft opening (the official opening date is June 13th), and pulling our wheelie cases through the slick lobby space, everything feels crisp, exciting and fresh-from-the-packet.

The thin building maximises its length, with a sloping, honeycomb concrete ceiling echoing the white panels outside. Sleek minimalism and architectural bravura are softened by splashes of colour – a purple orchid here, a mustard banquette there – but my wife Lynnea describes the look and feel as “masculine”. Don’t come for country house sumptuousness, in other words.

I like it. Design hotels can be intimidating, but this one slots nicely into the glitzy landscape of Grand Canal Dock – alongside Daniel Libeskind’s theatre, the red light-sticks of Martha Schwartz’s Grand Canal Square, and the glassy modern offices surrounding Chimney Park.

Staff have bought into the idea too. At check-in, we get a lovely smile, a 101 on the layout, the option of a free paper and an offer to be shown to our room. Every encounter with an employee ends with a pleasing ‘Is there anything else I can help you with?’

We check into 312, a deluxe room (pictured above, superiors and suites are also available) angled towards a picture-frame window overlooking Grand Canal Dock. Dark woods, Philippe Starck lamps and white walls are brightened by a purple carpet and citrus-green throw.

In terms of Dublin hotels, the space feels like a mix of The Fitzwilliam’s luxe decadence and the snappier, almost Scandinavian lines of The Gibson. The Marker is in its honeymoon period too, which means the towels feel fluffy, the surfaces are scratch-free, and the glassware is spanking.

In the bathroom, toasty underfloor heating invites bare feet, a Villeroy & Boch sink looks like a truncated think bubble and there’s a huge walk-in shower with glass walls. Lynnea proclaims the Malin + Goetz moisturiser one of the best she’s every found in a hotel. 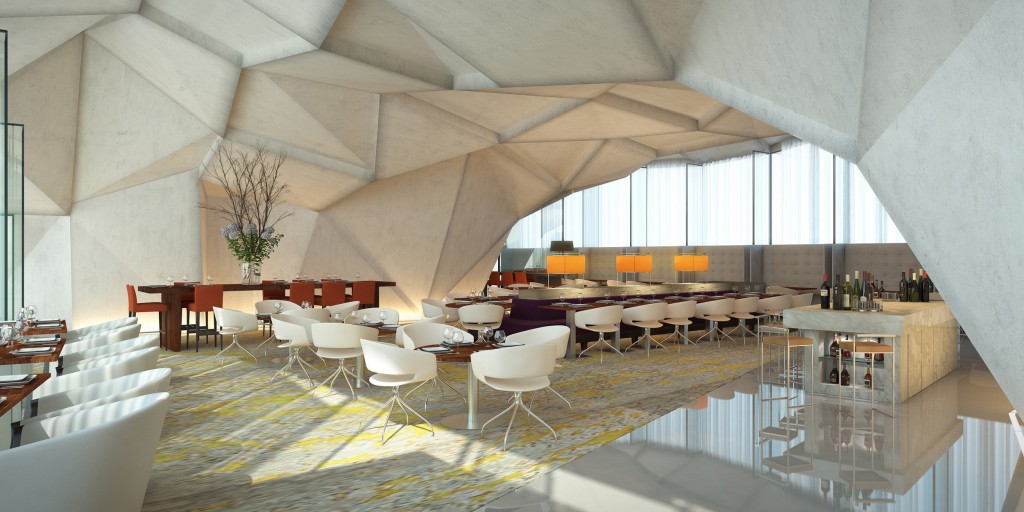 The Marker’s Spa & Wellness Centre is on a mezzanine level, quick to access from the rooms, and staffed by another impeccably polite and sharply-dressed attendant. It comes with a decent gym, and treatment rooms offering a full range of facials, massages, body scrubs and other treats.

I took a morning dip in the 23m infinity pool. Like the bedroom corridors, this is a charcoal-dark space, with Kirkstone tiles illuminated by a stream of light streaking through a veiled window. Some will find it stylish, others perhaps too stylised. It’s got wow-factor, but it’s certainly austere.

I enjoyed my swim and sauna, but there were teething issues. Temperatures chopped and changed between dressing rooms, corridors and pool, and the tiles were slippery when wet – which resulted in yellow caution cones spoiling the “cocoon-like ambience” (as the website has it).

Elsewhere, the Marker’s much-trumpeted rooftop garden (pictured above) hadn’t opened during our visit, but it sounds like an exciting addition to the cityscape. Open to the public as well as residents, its rocks and grasses were inspired by The Burren… and hopefully just as adept at dealing with rain!

Grand Canal Dock began its life in an entirely different Ireland, a time when it seemed possible to earmark a whole city quarter for redevelopment. Things have changed utterly, of course, and this bolthole-on-the-basin has had to work hard to stay on the city radar.

It has managed, however – just about. Libeskind’s Bord Gáis Energy Theatre, restaurant options like Herb Street or Ely Gastro Pub, and the sight of Viking Splash tours bobbing around the basin, or local kids playing in Chimney Park, stop it from feeling sterile. Follow your nose, and you’ll find layers of city history in place names like Misery Hill, Blood Stoney Road and Lazer Lane too. 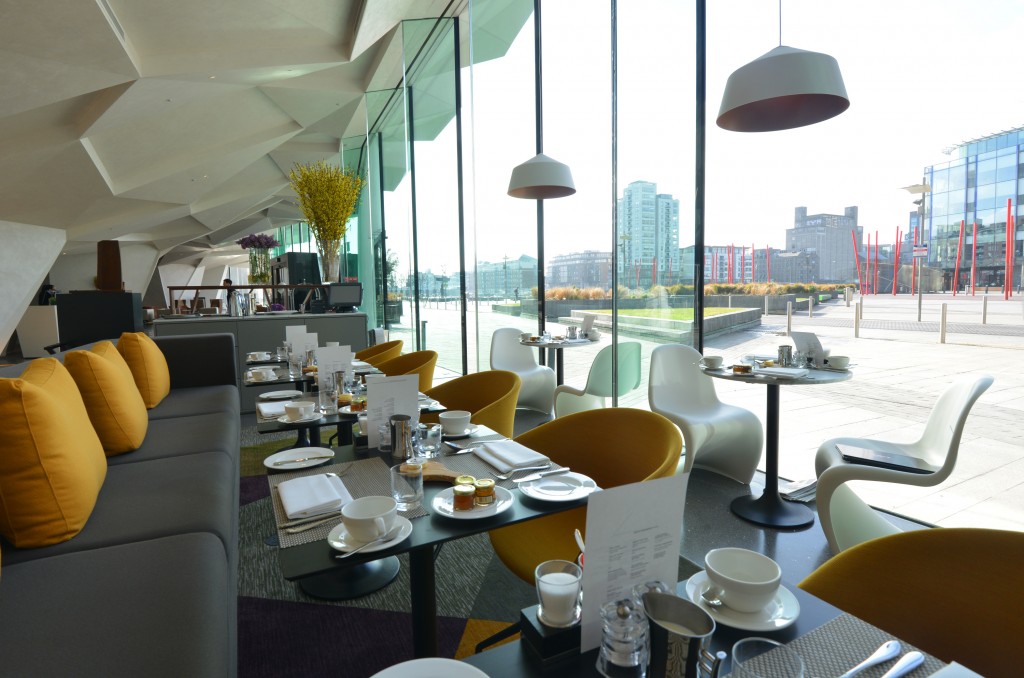 Meals at The Marker are the domain of Head Chef Garret Mullins, formerly of the Merrion Hotel, with local and seasonal produce set up front and centre in all menus.

If breakfast was anything to go by, this could be a breath of fresh air for Dublin’s fusty hotel dining scene. A buffet (€19.50pp) featured fresh juice, warm pastries with sprinkles of pistachio, Irish cheeses, a spread of soft and crusty breads, and some delectably creamy Killowen farm yoghurt.

Highlights of the cooked breakfast included beautiful scrambled eggs, tomatoes served on Portobello mushrooms, and tasty sausages from Tommy Doherty. The only blips were some poor gluten-free bread, and the labelling of pineapple and melon as “sliced seasonal fruits”.

Going to press, The Marker had an introductory offer of a deluxe room with breakfast for two guests from €169. Contact 01 687-5100 or themarkerhoteldublin.com.

All told, this new hotel feels like a bold reinvigoration of a building that once looked like a Celtic Tiger cautionary tale. Bringing 180 jobs to Dublin, as it does, The Marker could finally be a sign of less interesting times. And I mean that in the best possible way.