Think all hotel rooms are the same?

Think again. From converted prisons to jumbo jets and treetop suites, there are plenty of mould-breakers out there – offering an overnight stay that’s a destination in itself.

Before you check in, check these out…

That this five-star Maldivian resort (above) has an underwater restaurant is enough to justify its inclusion among the world’s weirdest and most wonderful hotels. What’s even better is that it turns that restaurant into an underwater bedroom on request.

That’s right, you can finally sleep with the fishes. The Ithaa Suite (as the conversion is known) includes a private champagne dinner and breakfast in bed – all while tropical fish float and glide around its 180-degree arched glass.

The suite is available for just a single night of your stay, must be booked well in advance, and the cost… well, that’s available on request too. Given that entry-level villas start at $1,800 a night, however, we can only imagine what it costs to clear out and convert an underwater restaurant for your romantic pleasure.

Even if you don’t sleep on the reef, you can enjoy the 11 restaurants and bars, two spas and all the diving and watersports that have seen the resort voted best in the Maldives for luxury. If you’ve got Hilton points, here’s where to use ‘em. 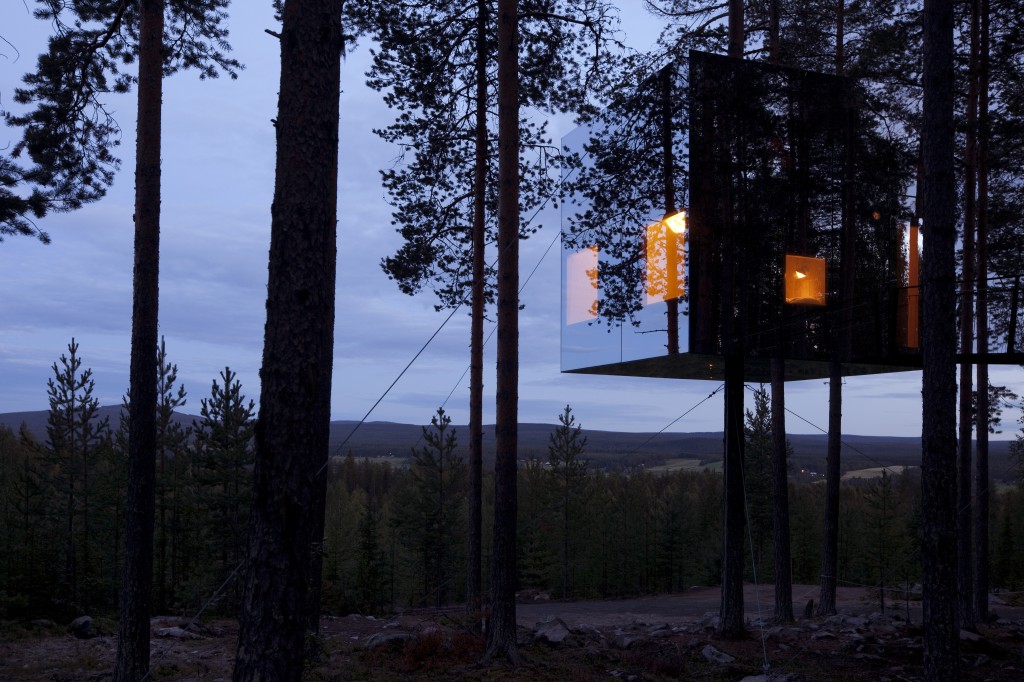 And why not? Treehotel, located in Harads near Sweden’s Lule River, was inspired by The Tree Lover, a movie by Jonas Selberg Augustsen. It’s a tale of three men from the city who go back to their roots by building a tree house together.

The hotel’s handful of rooms were created by some of Scandinavia’s leading architects, and the only thing they have in common is the fact that they are suspended several meters up like birds’ nests (literally, in one case).

A ‘mirrorcube’, for example, is camouflaged by mirrored walls that reflect its surroundings. A ‘UFO’ is cast in durable composite material – sleeping up to five guests in separate sleeping, bathroom and living areas. All rooms feature underfloor heating, low-energy LED-systems and a modern, environmentally friendly combustion toilet where you’ll be delighted to know “everything” is incinerated at 600°C.

Treehotel is located about 100km from Luleå airport, and it opens year-round. In winter, guests can take dog-sled rides or chase the Northern Lights; summer brings the options of horse riding, mountain biking or fishing and kayak on the river.

Oh, and there’s a tree sauna too. 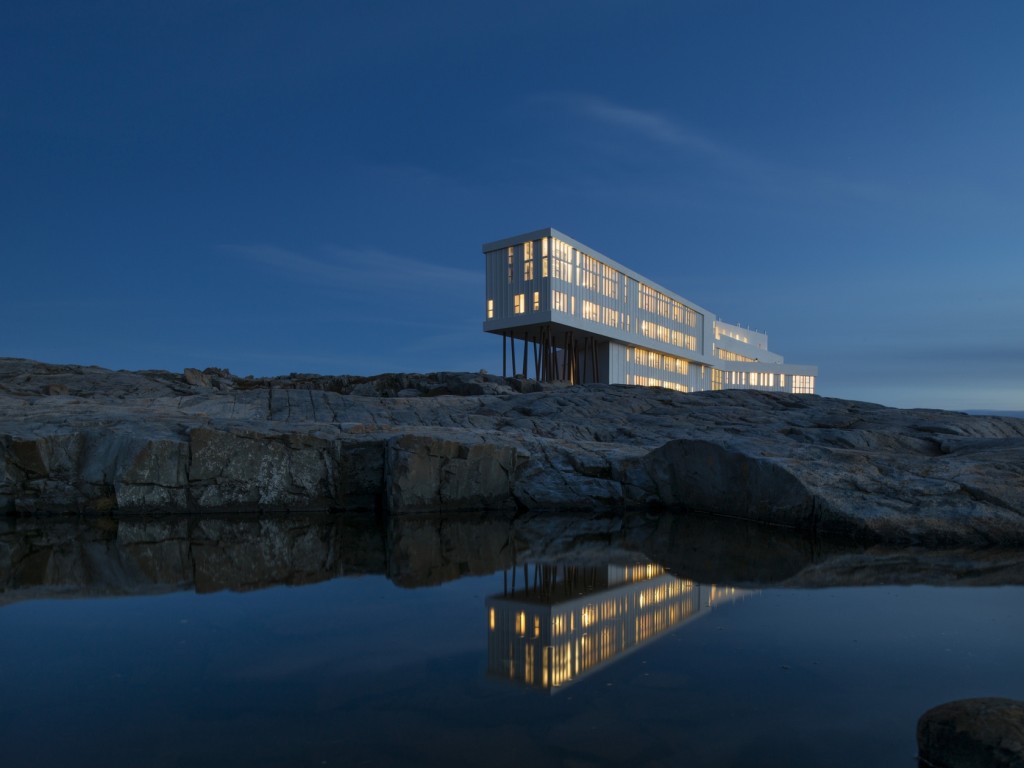 Canadian low-cost carrier Westjet begins direct flights from Dublin to St. John’s this summer. Getting to Newfoundland is only the start of your journey to Fogo Island, however – located a further six-hours along the Trans Canada Highway.

Similar to Inis Meain’s Restaurant & Suites, the Fogo Island Inn has a real luxury-at-the-ends-of-the-earth feel about it. Its 29 suites were built in part by islanders looking to sustain their culture and heritage after the closure of its cod fishery.

The X-shaped hotel – part of which is perched on stilts, like long birds’ legs – boasts unbroken, floor-to-ceiling views of the North Atlantic, but the contemporary design doesn’t forsake cosiness (essential in a Newfoundland winter). Wood-burning stoves, handcrafted textiles, a cinema, art gallery and sauna are all to hand.

Rates are full-board, including meals, afternoon tea, supper and gratuities. They’ve even got binoculars for spotting humpback whales. 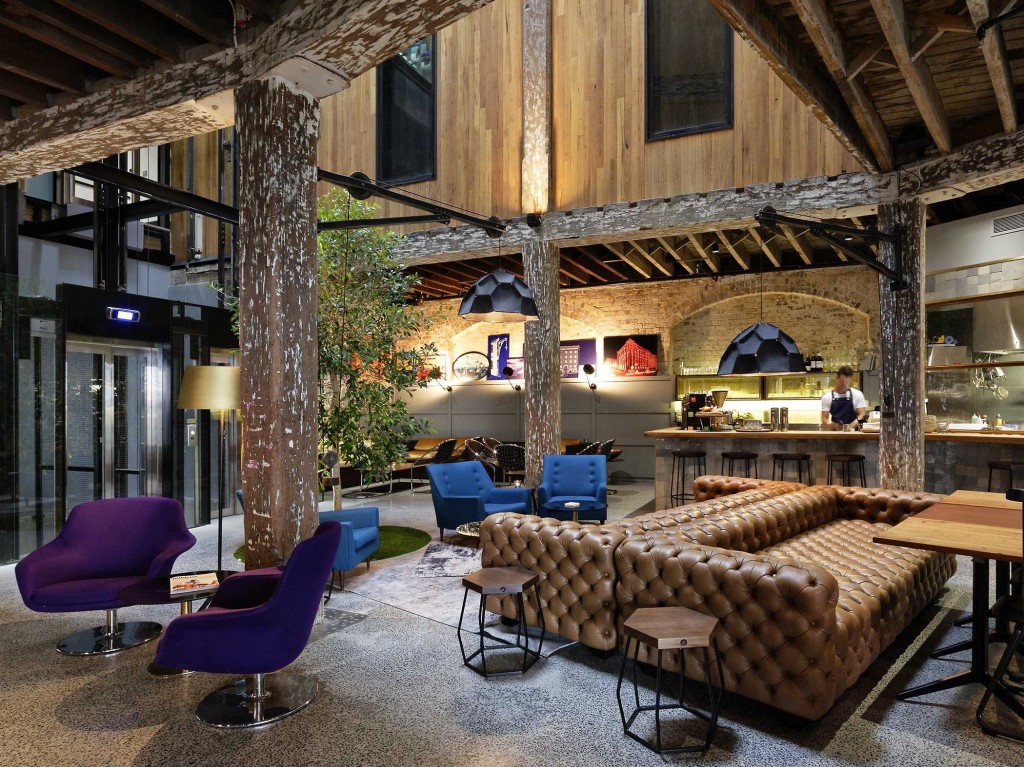 Sydney’s 1888 is a 90-bed boutique property that aims to marry its heritage-listed status with of-the-minute design and creature comforts. The exposed brick walls, original beams, bespoke furniture and Australian art lend themselves ridiculously well to social media – a fact the hotel has integrated right into its marketing.

The 1888 has worked with local fashion blogger Emily Fang, for example, to create an ‘Insta-Walk’ around the Pyrmont neighbourhood – the 45-minute stroll is specifically designed for inspire smartphone snaps. There’s also a ‘selfie space’ in the lobby, where guests can take pictures and post them with the #1888hotel hashtag (the images immediately appear on screens at reception).

There’s more: antipasto and Australian cheese boards will light up your Twitter feed, rooms and suites come with their own iPads, and Instagrammers with more than 10,000 followers are offered the opportunity to redeem a free night. 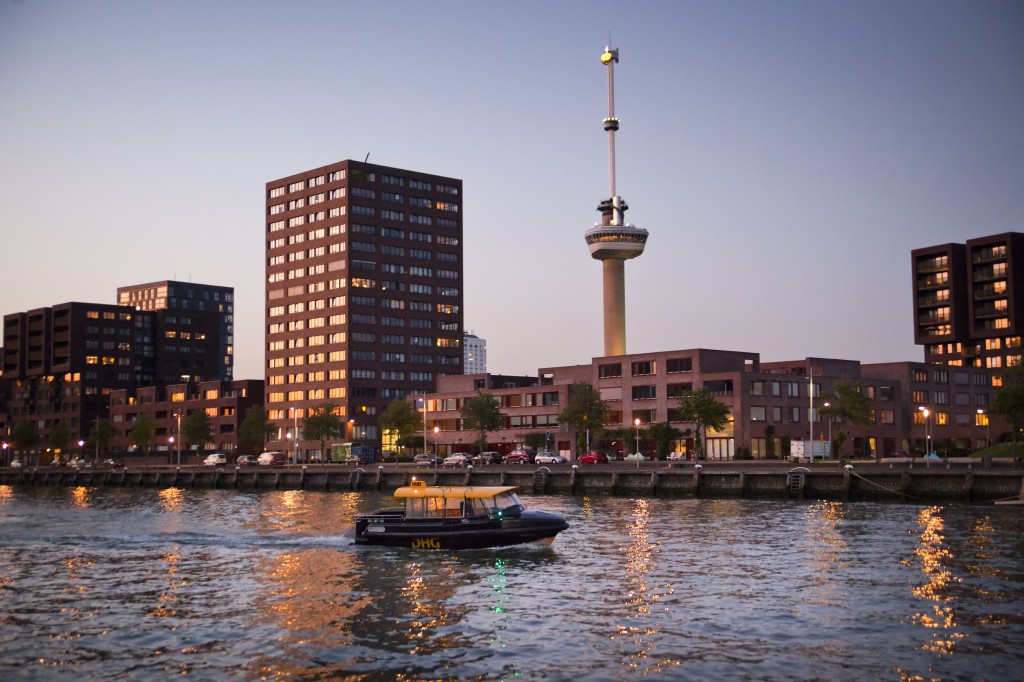 Think of it as Rotterdam’s crow’s nest. The Euromast soars 185 meters over the cityscape, making it the highest observatory tower in the Netherlands.

It also boasts two of the world’s coolest hotel rooms in ‘Heaven’ and ‘Stars’ – thanks to a makeover by designer Jan des Bouvrie in 2004. The suites are set above the brasserie at a height of over 100m, with breath-taking views of downtown Rotterdam.

Both include spacious double beds, lounge corners and mini bars. Guests also get exclusive use of the highest balcony in the city from 10pm to 9.30 am, with room service until 1am, and not to mention champagne on arrival. ‘Stars’ has a bathroom with Jacuzzi, while ‘Heaven’ is provided with a rain shower.

Checking out? Why not take the only abseil in Europe involving a 100m free-fall. It runs weekends from May to September and costs from €49,50pp. 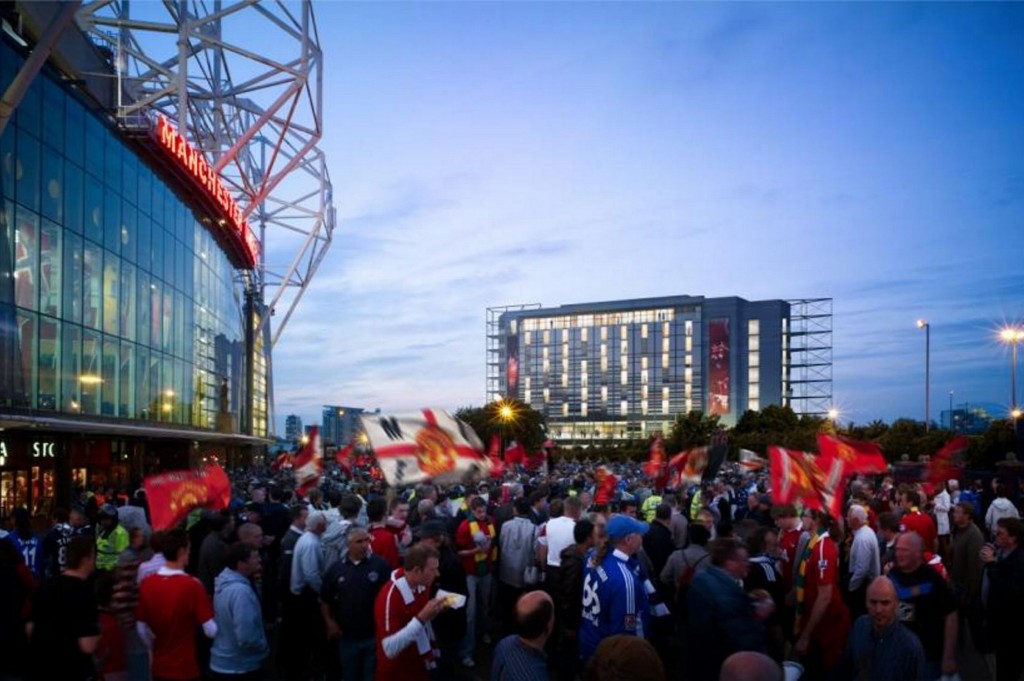 You already eat and drink football. Now, thanks to the Hotel Football – shortly to open next to Manchester’s Old Trafford stadium – you can sleep it too.

Hotel Football is the brainchild of GG Hospitality, a company that kicked off when Ryan Giggs and Gary Neville teamed up to bring their travel expertise to bear on a series of hospitality projects. This is far from a hostel for hooligans, however – the aim is to provide “a relaxed, friendly and welcoming environment with football at its heart”, GG says – with 134 rooms, a five-a-side rooftop football pitch and its own supporters’ club all taking their cues from the beautiful game.

October is the opening date. If you can’t wait till then, whoosh yourself over to The Street in London’s Westfield Stratford City, where Café Football is already up and running. No prizes for guessing which sport inspires its menu, which includes a starting eleven platter of chicken wings, ribs, fish fingers and pies from £16.95/€18.15.

7. The Ship in the Ice, Norway 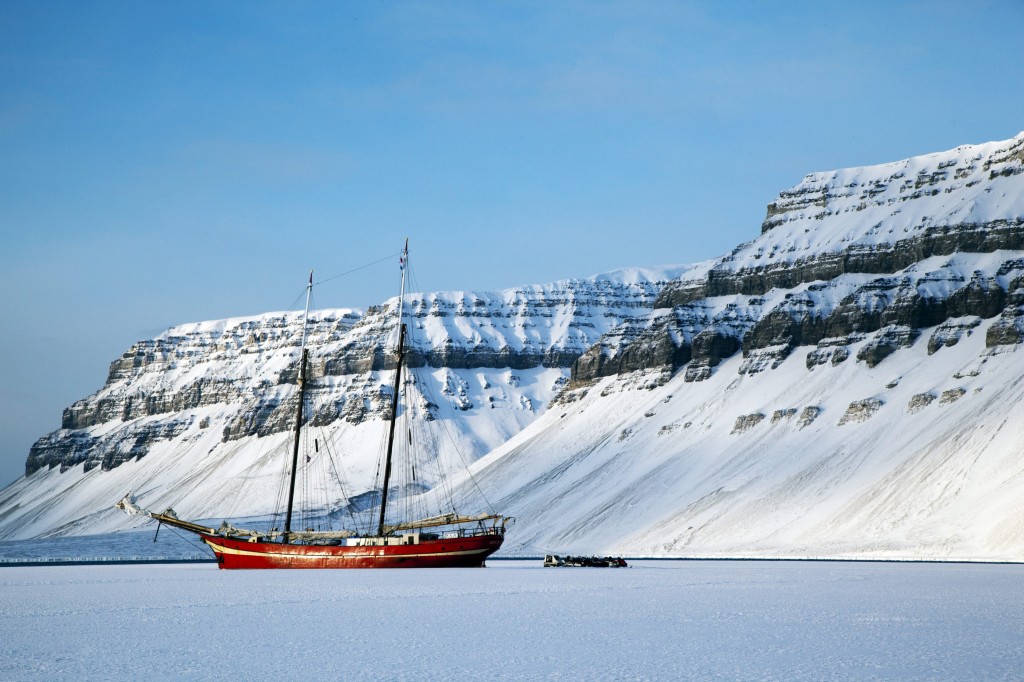 Only accessible by snowmobiles and dog sled, The Ship in the Ice sits in a fjord at the foot of Norway’s Templet Mountain, giving guests an authentic Arctic wilderness experience to match the “Fram” voyages of a century ago.

The ship opens for a three-month season from February through May, offering 10 well-equipped cabins with 20 beds, hot and cold water, a 220V power supply, showers and toilets (take that, Shackleton!). Two lounges and a bar have a selection of polar literature, and its chef prepares fresh meals and baked treats daily.

The journey to “the world’s only icebound hotelship” sounds as romantic as the destination. Travelling through untouched Svalbard landscapes, modern-day adventurers stand to see not just the Northern Lights, but perhaps even an elusive polar bear – ‘the King of the Arctic’ – too.

The ship itself is the Nooderlicht, a 120-foot Dutch schooner that first set sail in 1911 (the same year Roald Amundsen reached the South Pole). It rests in one of the few places on earth that the Northern Lights can be seen 24 hours a day.

Details: basecampspitsbergen.com; an 1.5 day snowmobile adventure, including meals and an overnight, start from 6,790NOK/€817pp. 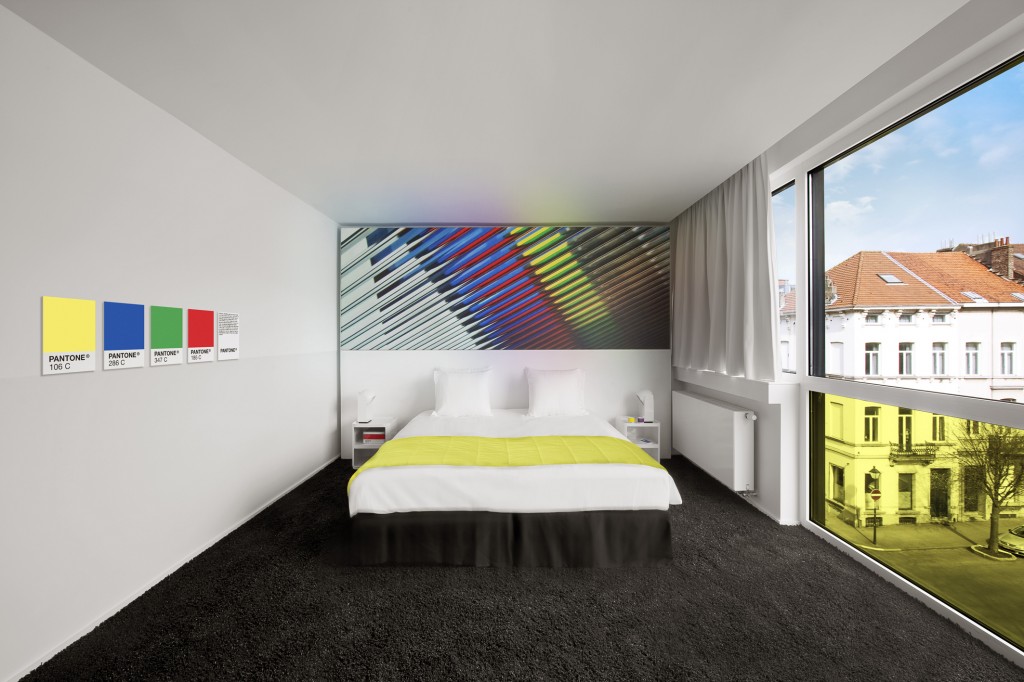 Want some colour in you life?

The Pantone Hotel “invites you to experience the city of Brussels through a lens of colour and a spectrum of comforts,” it says. “From the moment you arrive, our hotel will awaken your senses to an array of delights and playful surprises.”

Well, that’s the PR guff anyway. Designed by Michel Penneman and Olivier Hannaert, this boutique Belgian beauty layers poppy Pantone colours atop of lots of whites, allowing everything from mugs to bikes, chairs and headboards to sing. 59 rooms each include arty spectrums of colour – mounted like test strips – as well as tinted glass and unique images by Belgian photographer Victor Levy.

Its location is colourful too – right up close and personal with Brussels’ shopping and business district of Avenue Louise. 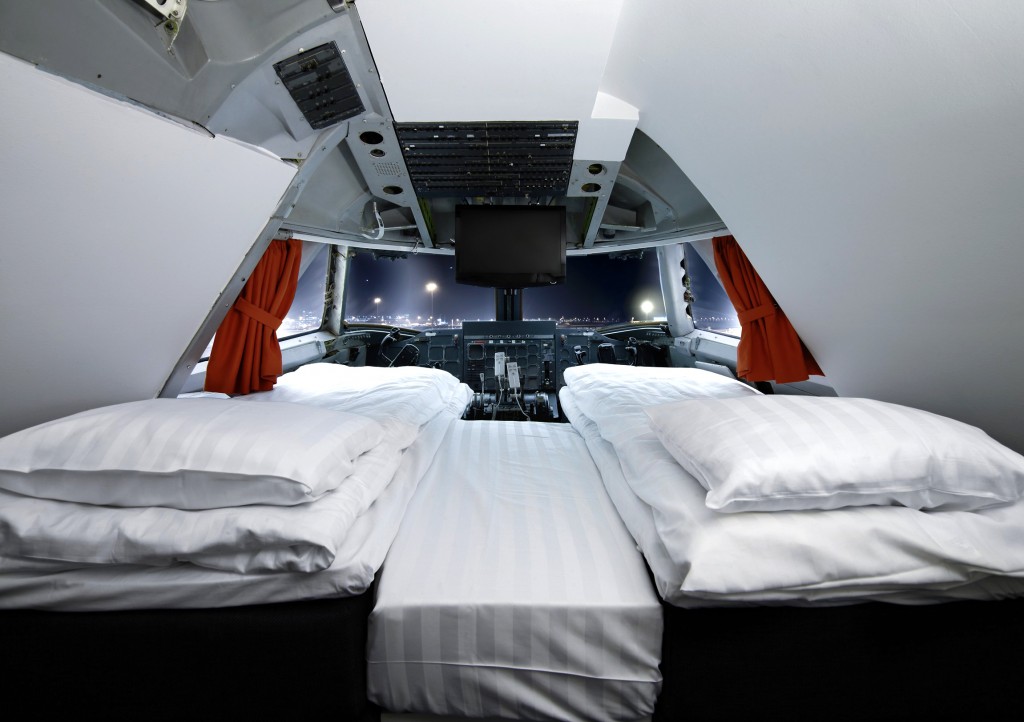 Sleeping on a plane is normally a cramped nuisance, with passengers folding away their limbs like Swiss Army Knives and snoring into each others’ faces whilst trying to eke out all possible warmth from a wafer-thin blanket.

Well, you won’t have to worry about legroom here. The Stockholm-Arlanda Airport’s Jumbo Hostel has transformed a 747 into a 27-room hostel with 79 beds, including a cockpit suite boasting panoramic views over the airport.

The hostel comes with a small galley kitchen and free Wi-Fi – although guests staying in the four-bed dorms can expect to share bathrooms. 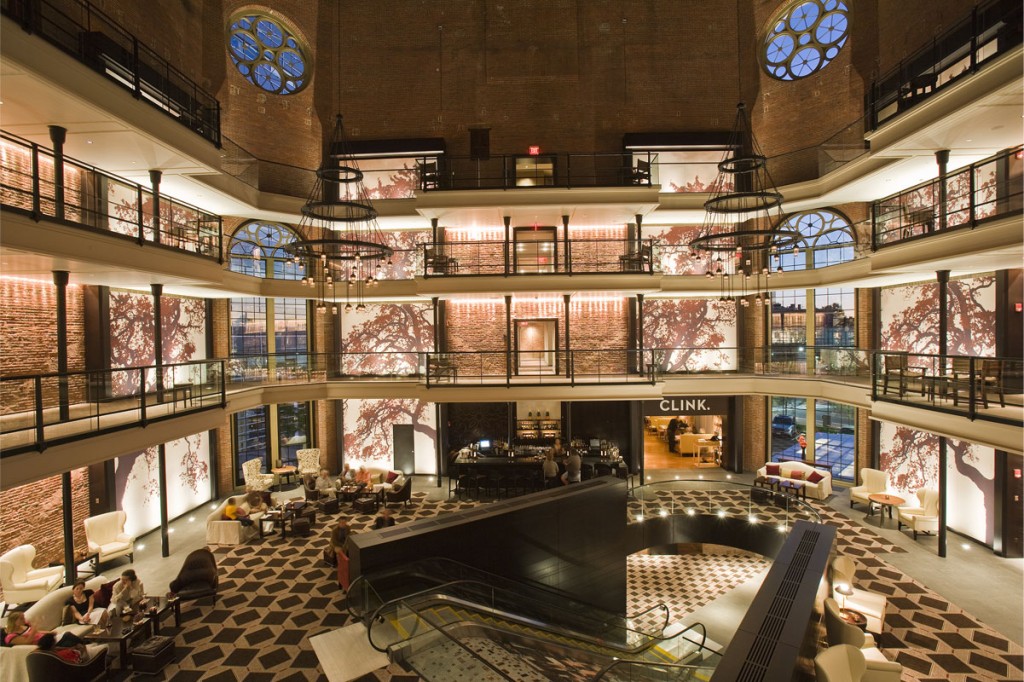 A night in the drunk tank doesn’t sound like the most auspicious start to a romantic getaway. It’s exactly what you want in The Liberty, however.

Not alone is the hotel itself a former prison – built into the 19th century Charles Street Jail on Beacon Hill – but its bar, Alibi, was the drunk tank. Its brick walls are lined with mug shots of misbehaving celebs (Sinatra, Jagger and erm, Lindsay Lohan), and you can still see the vestiges of former jail cells within the bar.

Or what about spending an evening in the clink? That’s the name of the hotel restaurant, and it comes complete with original cell doors. “This isn’t a jail,” Babe Ruth cracked when visiting in 1926. “It’s like a hotel.” Insightful, eh?

Incidentally, The Liberty is far from unique in its prison setting. The Four Seasons in Istanbul’s Sultanahmet is a former Ottoman prison, Cape Town’s Breakwater Lodge was once the city prison, and Oxford’s Malmaison uses jail cells from the former Oxford Prison as guest rooms – which are regularly used for weddings.

NB: Rates are per room, per night, and subject to availability. This feature originally ran in The Irish Independent’s Lineout Magazine.